Is that the reason behind the Prisoners resignation - is that a state secret? It seems improbable, but then most things are possible and cannot be ruled out.
I suppose that is the most permanent question in the minds of fans around the globe "Why did he resign?" A question certainly on the lips of most No.2's who are brought to the village. Yet No.2 of ‘A B and C’ seemed somewhat sympathetic towards No.6's situation "If someone can't chuck up a job things have come to a pretty pass!"
All No.2 wanted to know was why No.6 resigned, that's not so difficult is it? Ah, but No.6 realised early on, that if he gave away the reason behind his resignation that would simply be the tip of the iceberg, and then all the rest would follow!
But if No.6's resignation did happen to be a state secret, then he wouldn't be able to tell anyone would he, not even his fiancé Janet Portland, and then of course working for her father, Sir Charles Portland, well then he wouldn't be able to tell his daughter anything either, under pain of treason perhaps! Ah, now that does begin to explain something, because Sir Charles did tell his daughter that he had not sent her fiancé on a mission, that even he doesn't know where her fiancé is. And even then Sir Charles was telling his daughter more then he should!
Top state secret! And it is a singular fact is it not, that No.6 during his interrogation in the embryo room during Degree Absolute of ‘Once Upon A Time,’ that No.6 did admit that he was on a mission, after being caught for speeding, it was a mission of life and death, whose life or death No.6 was not willing to divulge. However it was secret business, top secret, state secret business of the highest order. And what's more No.6 could tell the judge what it was all about, because such business is above the law! And what's more you will recall how No.6 had been recruited into the banking business, but how it was a cover for secret work. A top secret and confidential job.
If the village is run by those on the same side as that of No.6, "I'm on our side" No.6 informs the new No.2 during Arrival, who wants to know where No.6's loyalties lie ."You know where they lie!" No.6 tells him. So that being the case, given No.6's unusual qualities and the extent of his knowledge, it is not then at all surprising that his own people would wish to keep such a man on a short leash, and what better place to keep him, but in the village, and a prisoner for life. Because such a man as No.6 might very well be extremely dangerous to national security, another reason to keep him - confined, for his own good as well as the well being of the nation.
Yet it was all a bit of a trial for No.6, and having survived he was acquitted at his final trial during Fall Out, and given the opportunity to go and leave the village! The only question you need to answer here, is "Was No.6 deserving of his acquittal?"

Worst Moment In The Prisoner
When in 1968 the original screening of the Prisoner series came to an end and I was desperately trying to remember all that happened in Fall out!

For The Prisoner - The Road Lies Ahead! 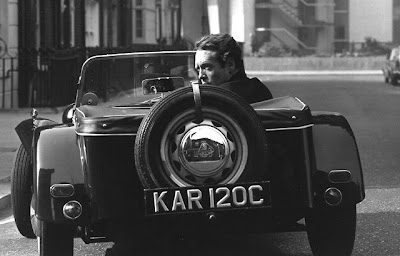 Its no good looking back old boy, what's past is past. It's in what lies ahead, where the difficulties are to be found!