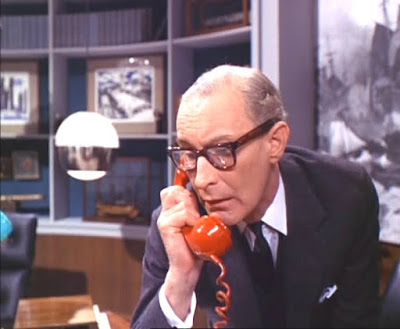 “Fotheringay here yes…….yes I’ve seen a copy of the deciphered message……………what time would you say?............good….yes I can’t wait to see him, we were at school together.”
So who was that on the blower Fotheringay? The Colonel, I shouldn’t have thought so he could have told you that in his office. What are you doing in the Colonel’s office, where is the Colonel why isn’t he there to answer the telephone? I can’t see it being No.2 on the telephone, unless it was he who telephoned you to say the crate was being moved, which it was, supposedly being loaded onto a cargo plane, and that your old school chum should arrive about which time. But then why should No.2 bother to do that would you say? Because as long as you are in the Colonel’s office it doesn’t matter what time he arrives. Anyway where is the Colonel, he should be there in his office. In fact if the Colonel was in the office instead of you Fotheringay, there wouldn’t have been any need for your presence, unless they knew that our friend No.6 would expect to see you. So where is the Colonel Fotheringay…….not talking eh? Oh I forgot, he was occupied with organizing the arrival of the crate, leaving you to mind the phone!
I know he resigned his job, and now being an ex-colleague, but if this is the way you treat an old school chum I don’t think much of it myself! So off you go now, back to before any embarrassing questions are asked, what……..they don’t know you and the Colonel were away from the office! Well that makes you both nothing more than a pair of traitors! Mind you I think you got off pretty lightly me old Fotheringay, because I’m not so sure the Colonel was allowed to leave the village, having failed in his assignment!