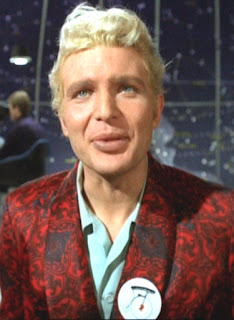 This one time interim No.2, who in my opinion is a right crawler "Yes sir. No sir, just as you orderd sir, three bags full sir!" He must have impressed with his crawling, because out of all the interim No.2's who have served while No.2 was away on leave, became the heir presumptive, and eventually the new No.2.
Now it may have come as a surprise to this new No.2 to see the helicopter turn back towards the Village at the end of the episode, thus saving his bacon so to speak. But do not forget this new No.2 did fail in the primary objective, the assassination plot/execution of the retiring No.2.
Certainly he was not at all happy at No.6's involvement in preventing the execution, and aiding in the the escape of the retiring No.2. One can only speculate about what he may have in store for No.6 the day after Appreciation Day had the escape of the retiring No.2 actually taken place. That is, if he survived to take up his position as No.2. Sadly we are not privy to what took place between It's Your Funeral and A Change of Mind. Because it must have been a very nervous No.2 who picked up that red telephone to take a call from No.1, once he had taken up office, if he was allowed to take up office in the first place. Because do not forget, this No.2 had failed before he had even begun, if you see what I mean.      I'll be seeing you.
Posted by David Stimpson at 11:32