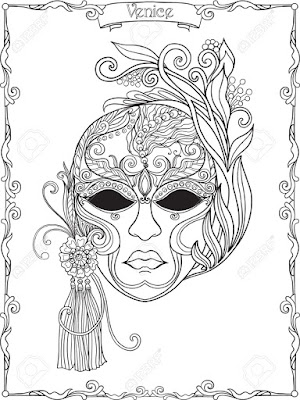 Well not quite Venice, but an Italianate village is as a good a place to hold Carnival as any I should think.
‘Dance of The Dead,’ Death lurks through the entire episode, from the moment No.6 finds the dead body of No.34 on the beach, to the living death forced upon Roland Walter Dutton after the doctor-No.40 allowed his enthusiasm to get the better of him in his experiments. To the moment No.6 is sentenced to death, the Judges sentence in the name of the people, the people carry it out in the name of justice. Just as well then that the mob baying for the Prisoner’s blood didn’t lay hands upon him, otherwise they would have torn him limb from limb, a not too healthy prospect for No.2!
~    No.6 comes into possession of a radio, such goes against the rules, but what was No.34 doing with a radio, and how was he able to smuggle that into the village? Sitting on the outlook No.6 tunes the radio in and listens to a radio transmission, which could easily have been transmitted from the village “Nowhere is there more beauty than here. Tonight when the moon rises, the whole world will turn to silver. Do you understand, it is important you understand. I have a message for you, you must listen, the appointment cannot be fulfilled. Other things must be done tonight. If our torment is to end, if liberty is to be restored we must grasp the nettle even though it makes our hands bleed. Only through pain can tomorrow be assured.” The message seems to be intimating the village, and the person reading that message sounds very much like that of a previous No.2……the voice of Eric Portman!
Map of The Village, No matter how roughly sketched No.6’s map it has no indication of location of the village, no longitude or latitude, which he must have learned from his search for the village in the previous episode ‘Many Happy Returns.’ But there wouldn’t be would there, because ‘Dance of the Dead’ was produced before ‘Many Happy Returns.’
An invitation to “Carnival and Dance” But No.6 has no elaborate costume; instead his own suit of clothes had been delivered especially for the occasion. And in that perhaps they thought No.6 would be happier as himself!
Old colleagues, In ‘Arrival’ No.6 met up with Cobb on the hospital ward, and now he encountered Roland Walter Dutton in a cave on the beach, but what of Chambers? Dutton and Cobb have something in common; they find it difficult to say how long they’ve been in the village!
If meeting up with Dutton was a shock, No.6 received an earlier one, as he tried to follow No.240 into the Town Hall. I bet he wasn’t expecting that!
“Are you alright, you tried to go in…..by mistake? Its fussy about who it lets in…. this is the Town Hall.”
I bet No.6 wasn’t expecting that, to be hit by an electronic force field! But then why should he, after all he had been in the Town Hall before. Unless of course ‘Dance of The Dead’ was to precede ‘Free For All,’ then it would have been right, No. 6 would have known that this is the Town Hall, not having been in it before. However had ‘Free For All been preceded by ‘Dance of The Dead’ then there would have been no need for No.6 to go to the Town Hall in order to witness the disillusionment of the out-going Council, because there would not have been an election. The fact that the Village political system has no opposition! In the first place, No.2 is appointed, not elected by the people, and in the second place No.6 knew that this is the Town Hall, No.2 told him so during his aerial tour of The Village on the day of his arrival. But perhaps he had forgotten, after all there had been a great deal for him to take to take in that morning! 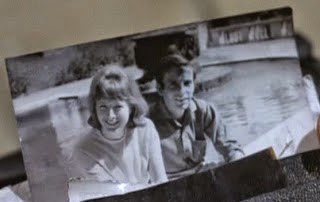 When No.6 wakes up after spending the night on the beach, he finds the body supposedly washed up on the beach. The body could have been placed there for No.6 to find. He goes through the dead man’s pockets, and opens the wallet and takes out the photograph of a couple sat by the pool and fountain in the Piazza. There is also a letter, and three raffle tickets. Later in another scene on the Outlook, No.6 takes the wallet from his pocket, and looks at the photographs again. Is he wondering about the couple in the photograph, and how it is that the body of the man washed up on the shore has a picture in his pocket of a couple photographed in the village? But of course the dead man No. 6 found is the man pictured in the photograph, and by the manner of his attire, probably on the day of his arrival in the village. There is another story here. Who is the young woman pictured with the man, and who took the photograph? No.6 might have been curious enough as to find the woman, to tell her that he had found the body of her dead husband, or boyfriend. Otherwise why does he seem curious about the photograph? There is also a strip of negative film in the wallet, perhaps the negative of the photograph. Perhaps the couple in the photograph arrived in the village together, as she is not wearing a badge. They look as though they are on holiday, and just asked someone to take their photograph. Perhaps they came willingly, in the same way of the Professor and his wife. That they came to the village for a reason, and yet the man in the photograph was found dead. So then what happened to the woman in the photograph?
Finally the black cat, they say a cat has two homes, but what about two owners? The cat couldn’t have belonged to Mrs. Butterworth because the cat was in the village before she arrived, there having been a male No.2 during the opening sequence to ‘Many Happy Returns.’ So the cat must have belonged to No.2 of ‘Dance of the Dead,’ which means she must have left the cat in the village when she left. That would be due to the production order, but still would have been right had ‘Dance of The Dead’ been placed as originally intended, 2nd in the screening order. But as it stands the cat is in the village before the advent of ‘Dance of the Dead, so the cat must belong to Mrs. Butterworth, and when she left the village she left both cat and Martha in the village!