Life In The Village! 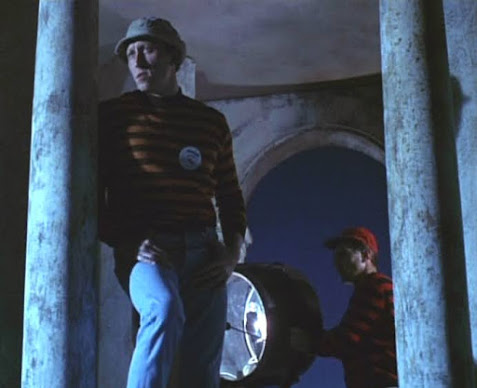 “It’s a quiet night.”
“Quiet enough.”
“Are we going to be up here all night?”
“Looks like it; it’s as the supervisor said, its special duties.”
“Special duties.”
“Yeah, you have to be really special to be chosen for special duties.”
“Only because the others managed to dodge it! What are we doing here anyway?”
“Well its like the supervisor said, we’re to man the searchlight and keep a sharp lookout.”
“See that holdall.”
“Yes.”
“There’s a flask of tea in it.”
“Oh good! Did you remember the sandwiches?”
“Off course I remembered the sandwiches, cheese and pickle, and ham and tomato.”
“What are we supposed to be keeping a sharp lookout for?”
“How do you mean?”
“All I know is every citizen is tucked up in their cottages, all snug and sedated, and yet here we are, the only two people stupid enough to be in this tower manning a searchlight, it’s like being in a blasted light house. What are we looking for anyway?”
“The supervisor said we’d know when we saw it.”
“What do we do if we see it?”
“We tell the supervisor.”
“And what will he do?”
“He’ll tell Number 2.”
“And what will he do?”
“Well...he’ll probably tell someone else!”
“How do we tell the supervisor?”
“We’ve been given a walkie-talkie.”
“Cool!” No.246 said picking up the device “Zed victor one to bee dee.”
“What’s that?”
“The Z-cars call sign. Zed victor one is us, and bee dee is the cop shop.”
“Who’s that?” a voice over the walkie-talkie asked
“Its the searchlight crew over.”
“Over, what’s over?”
“Its proper radio procedure, once you’ve said something you finish by over.”
“Do you have anything to report?”
“You didn’t say over
“Do you have anything to report, over?”
“No.”
“Well until you do maintain radio silence, over!” the supervisor said.

“It’s a bit draughty up here!”
“We’d know about if it was a wet and windy night!”
“Well seeing as you’re the keeper of the light, and I’m your mate, I should leave you to it and go below.”
“And do what?”
“Well, I don’t know, but I could find something to occupy myself.”
“Well occupy yourself by getting the flask of tea out, while I sweep the estuary with the searchlight.”
“Here’s your tea.”
“Cheers mate!”
“This searchlight?”
“What about it?”
“Waving it about like that, doesn’t it draw attention to the village?”
“Who is there out there to see?”
“That’s my point, who are we supposed to be looking out for?”
“I don’t know, anyone, saboteurs, anyone attempting to escape, a boat coming up the estuary.”
“Since when do boats come up the estuary?”
“There’s one!”
“There’s one what?”
“A boat, I’m sure I saw a boat!”
The searchlight swept across the estuary back and forth until it lit up a dark shape of a motor cruiser heading out towards the estuary.
“You had better report this to control.”
“If the village was about to be invaded wouldn’t that boat be coming towards us?”
“Perhaps it did, perhaps we missed her the first time, and the crew dropped off a spy!”
“This is the tower calling control, tower to control.”
“Control here, you didn’t say over!”
“What?”
“You said this is the tower calling control, tower to control, you didn’t say over!”
“There’s no time for all that, there’s a motor boat in the estuary, the crew have dropped off a spy on the shore!”
The supervisor immediately issued an Orange Alert, and alerting all posts to look out for a spy who had been landed on shore by an unknown boat. The Guardian was released from the containment area on the seabed, its amorphous mass rising up through the water, and bursting through to the surface skimmed cross the waves.
“Anything on sonar?” the supervisor asked.
After a moment or two “No sir” the sonar operator reported “there’s nothing coming through.”
“Supervisor” said an Observer turning from his monitor.
“What is it?”
“I’ve just picked up the motor cruiser heading out to sea.”
“Good, let’s have it on the screen, camera 37 night vision.”
The wall screen came to life and via the green light of night vision the motor cruiser Polotska was plain to see.
“Scrub that orange alert, and stand all posts down, and get me that searchlight crew!” the supervisor ordered.

“Well it wasn’t our fault.”
“No it wasn’t, merely a false alarm that’s all.”
“It showed control how alert we are up here!”
“Yes.”
“Blue-jay calling Night-Hawke, you receiving over?”
“Blue-Jay this is Night-Hawke receiving over.”
“Blue-jay calling night-Hawke, Blue-Jay calling Night-Hawke we have to take out that searchlight over.”
“Roger!”
“Pass the sandwiches.”
“Cheese and pickle or ham and tomato?”
“Cheese and pickle, this is a waste of time, nothing’s going to happen tonight!”