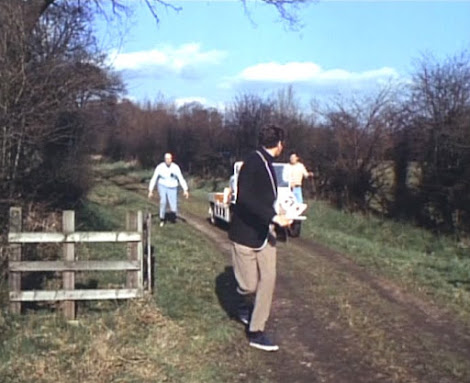 But how far out of the village? Quite a ways it seems!

No.6 is pacing up and down in the study in his cottage. He has something on his mind, the telephone begins to bleep. Picking up the receiver, No.2 tells him that he wants him at his house immediately. No.6 tells him they’ve nothing to talk about. Replacing the receiver he leaves his cottage and goes for a long walk. I wonder how far No.6 was allowed to wander from the village before No.14 and his henchmen caught up with him for ignoring No.2’s order, beyond the woods for example? It’s certainly a goodly way, and we have seen this countryside before in ‘Many Happy Returns,’ the track, hedges, and what looks like the woods in the background, but No.6 was driving a Mini-Moke then.
And No.2 didn’t tell No.6 that he wanted to see him in the Green Dome, he described the building as his house. It’s not a house, the Green Dome is a glorified administration building which acts as No.2’s office. No.2 quarters are in that room in the Town Hall!