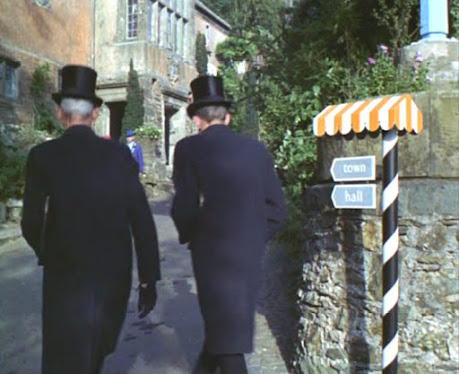 It was a warm summer’s day when the two administrative top hat officials were walking through the village, via the long way round, to the town Hall.
“We look like a pair of undertakers!”
“Have you only just realized that?”
“What I mean is everyone else here is dressed as though the village were a holiday resort!”
“The village-next-the-sea you mean?”
“Something like that.”
“Well it’s the uniform isn’t it?”
“Is it?”
“All those people dressed as though at Henley Regatta, you don’t imagine they are all enjoying themselves do you?”
“Well if they’re not they are making a jolly good fist of it!”
“It’s all pretence you know, none of its real. They look as though they are enjoying themselves but that’s not the reality.”
“It isn’t?”
“I’ve seen them down on the beach, playing beach ball, sunning themselves, building sand castles, eating ice cream, you don’t think for one minute that I envy them do you?”
“No of course not.”
“Well you’re a damned fool then, of course I envy them, there’s hardly a day passes when I think why aren’t I down on the beach enjoying myself?”
“Why don’t we take the afternoon off and spend it down on the beach?”
“Do you think we really could?”
“We could roll up our trousers and go for a paddle in the sea.”
“Yes, but that wouldn’t look dignified would it?”
“Who cares?”
“Can we have ice creams?”
“I don’t see why not, we’ll make an afternoon of it.”

Can you imagine two such administrative officials down on the beach, trousers rolled up, paddling in the water eating ice creams? No neither could the Observers when they reported the scene to the supervisor who reported it to No.2, who sat watching the pair on his wall screen!
“I say…..do you see that?”
“See what?”
Then he heard it the blood curdling roar of the Guardian as it rolled and bounded across the sand towards them.
“Split up.”
“What do you mean split up?”
“You go one way and I’ll go the other, it can’t pursue the both of us.”
“And then what?”
“It’s our funeral!”