Is This The Face Of Number One? 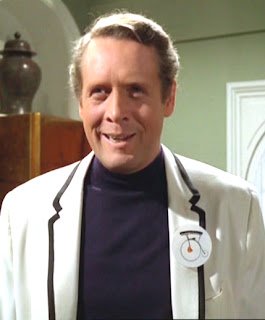 Is this the face of No.1? If we are to take Fall Out at face value, then it must be. Why No.1? Well he doesn't want to spend all his time couped up in that rocket all the time. Perhaps he wanted to get out and about for a while, certainly The Schizoid Man episode would give him the opportunity to do just that, and what better way to do it, than to impersonate No.6. Obviously he would have had to give himself a name, Curtis. Yes I know, there is a whopping great hole in this, and that is Curtis and No.2 have worked together before, or at least that's their story, who are we to know really? We don't even know how No.2 received his instructions for The Schizoid Man. If via No.1, then No.2 could have been told anything. No.1 might even have been impersonating Curtis, but that might be stretching a point just too far.
No, for me I like to think this is the face of No.1. Out and about in the Village, enjoying a little freedom which The Schizoid Man affords him. Perhaps he wanted to get his hands dirty for a change, to gain some hands on experience with No.6...........Well he's getting that alright! 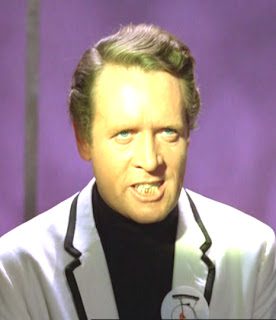 He doesn't look so happy, so cheerful here does he? He persists with the idea that he is No.6. He certainly looks like No.6. But No.6 doesn't go about wearing a cream blazer, and he hasn't worn his badge, not since he took it off outside the hospital the day after his arrival in the Village.
I suppose you are going to say that there is another flaw in my idea that this is No.1, that Curtis died at the end, suffocated to death by the Village Guardian. Well we only have No.6's word for that. Perhaps 'Rover' had only suffocated Curtis into a state of unconsciousness, and his pulse was only faint. Or of course there could be another reason, that Curtis wasn't dead at all, that No.6 was looking after No.1. Who headed back to the relative safety of the Rocket as soon as he was able!
Well one has these thoughts, and with such thoughts they are better written down so that they may be seen in their true proportion. But either way, this is the face of Number One. And if it is Curtis who died at the end of the Schizoid Man, who is No.1, if it isn't Curtis or No.6? I mean how many look-a-likes, or dopplegangers can No.6 have?   I'll be seeing you.
Posted by David Stimpson at 08:52