It’s A Suffocating Experience!
The white membranic mass of the village guardian, "Rover" as it is called, seems to me to be the ideal "thing" best suited to the job of village guardian. Certainly I can think of nothing better suited, but it might not have been so, had "Rover" MK1 been the success that it might have been, instead of the complete and utter failure it was.
This "Rover" MK1 prototype had been designed to travel over land and water, under water as in submarine, to emerge from the water onto land as in hovercraft. To be able to climb steps and walls, and do all sorts of marvellous things with its blue light flashing. In fact it was supposed to be the be-all and end-all of mechanical things. But the end result was that this beast of a thing sank without trace, somewhere out in the estuary it has been stated, but never found!
It was made from a go-kart with a dome structure on top. With a blue light and slit for the driver of the said go-kart to see out of. It was noisy with its 2-stroke engine, so noisy that it is all the sound man could pick up on his sound equipment! On tarmac it was a wonderful machine, but it couldn't travel on sand, let alone go up steps, and climbing up walls would be completely out of the question. the thing as prop-man Mickey O'Toole described it; "It was a go-kart which was adopted to take a dome which was made at the MGM studio, a great dome was put on top with a lovely frill all around the bottom as well, and a blue flashing light was mounted on the top of it with a 12-volt battery strapped on your back to keep it going. I was supposed to drive it. I got it out and tried it on the tarmac and it was fine. We went up and down and it was lovely, but your vision was limited. There was just a small slit in the front of it, it was like a horse with blinkers on. Two guys had to put you in there because of the dome which required two men to lift it on and off. It was quite heavy that dome, you couldn't get out of, if the thing caught on fire, if the battery exploded and you were underneath this thing. It didn't even make it past the road down here. They got rid of it."
With the question of how the white membranic village guardian came about is questionable. The story goes that after the failure of "Rover" MK1, Patrick McGoohan was looking up at the sky and spotted a weather balloon. and said that's it, that's what I want, or words to that effect! Then there is the other side of the story, that it was Don Chaffey who put the suggestion to Pat, and that hundreds of these weather balloons were acquired from a nearby meteorological station in . There was no such meteorological station anywhere near Portmeirion, well so it has been said. It was also said that "Rover" MK1 sank somewhere in the estuary at Portmeirion, but no trace of this contraption has ever been discovered. That there are no photographs of "Rover" MK1, that no extras ever saw it! In fact it has been documented that many people , including noted Prisoner authority, no not me by the way, believed that "Rover" MK1 never existed at all! Such were the stories going about at the time. But today we know different, don't we. We’ve seen the photographs. 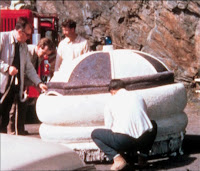 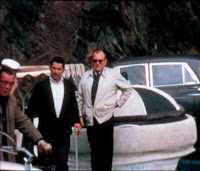 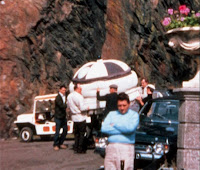 So the MK1 "Rover" didn't exist! Perhaps with none of the extras reporting not having seen it, it was probably the case that the MK1 "Rover" was tried out before the days filming began to take place. It is often the case that when rumours begin, that go on as stories, and story become close to fact. Did the MK1 "Rover" actually sink to a watery grave out in the estuary? Well that too is debatable, if it wasn't much good around the village I couldn't see them humping that "thing" down onto the beach. No more than likely the MK1 "Rover" was put back aboard the truck that brought it to Portmeirion, disassembled some place and the go-kart returned from whence it came. Perhaps it was the same go-kart which Drake used in the Danger Man episode The Paper chase.
Be seeing you.
Posted by David Stimpson at 08:18