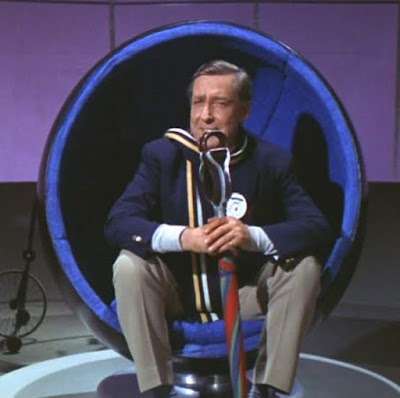 “Good morning Number Two, we hope we haven’t caught you at a bad time.”
“Pushed for time perhaps.”
“Isn’t it always the way!”
“Look I’m expecting someone for breakfast in a few minutes, what can I do for you?”
“I am Number One-one-three, and this is my photographic colleague Number One-One-three b, we contribute to The Tally Ho. We haven’t had anyone of your calibre in The Village before.”


“Smile” click goes the camera.
“He took my photograph!”
“Yes he does that. But don’t worry you won’t appear in The Tally Ho.”
“No?”
“Well not unless you have a photograph of yourself in mufti.”
“You mean civilian clothes.”
“Yes, that’s what I said.” 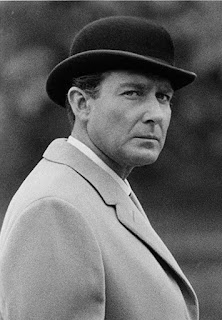 “Well as it happens I do have a photograph of myself, is this any good?”
“Perfect. Just a minute, this photograph it reminds me of someone, I mean you remind me of someone.”
“Really, who might that be?”
“Colonel Ross!”
“Colonel Ross?
“Of British Intelligence.”
“And what do you know about British Intelligence?”
“I saw the IPCRESS file once.”
“Really, how very boring!”
“I’m surprised that technique hasn’t been employed here.”
“Really.”
“So how did you end up here Colonel Ross?”
“Never you mind.”
“A Colonel as Number 2, we’ve never had a Colonel before. We had an Admiral in charge for a time but that didn’t work out.”
“Perhaps he didn’t know how to play the game.”
“Oh he does, but now chess is his game. Well we’re all pawns aren’t we?”
“I’ve never met anyone as insolent as you, unless it’s Palmer!”
“Is that who you are expecting now Colonel, Palmer?”
“Sergeant Harry Palmer…….”
“A sergeant eh, we’ve never had a non-commissioned officer here
before, but then we do get all sorts here. Never know who you’ll meet next.”
“Well if that’s all…………..”
“Alight Colonel……I mean Number Two, keep your hair on. No doubt you’ll be giving Palmer the full guided tour.”
“Oh it will be my pleasure to give Palmer the full works. He’ll be made very welcome!”