Watching The Prisoner - A Change of Mind

“They’re right of course, quite right!”
When it comes to physical exercise just as Kosho links ‘Hammer Into Anvil’ with ‘It’s Your Funeral,’ or possibly the other way around whichever way you like to look at it, No.6’s homemade gymnasium apparatus in the woods links ‘It’s Your Funeral’ with ‘A Change of Mind.’
To my mind No.6’s home made gymnasium apparatus is first established in ‘A Change of Mind,’ or at least at a time before this episode, that’s why I place this episode before ‘Its Your Funeral’ in this slightly amended screening order to the one in my book ‘The Prisoner Dusted Down.’ And I imagine it is from ‘A Change of Mind’ that the film footage is taken of No.6 working out in his own private gym which appears in the daily prognosis report on No.6 in ‘It’s Your Funeral.’ Certainly the prognosis report would be looking back at his previous activities, and that in itself would be enough to place ‘A Change of Mind’ prior to ‘It’s Your Funeral.’ For my book I attempted to get as close as I could to a definitive screening order of ‘the Prisoner,’ and yet having amended that screening order slightly for my watching the series now, its plain to see that there can be no definitive screening order, simply on the grounds that there are far too many imponderables! Perhaps it would be simpler to stick to either the screening order or the production order of ‘the Prisoner,’ but even those throw up their own inaccuracies!
There is a saying, “Birds of a feather flock together,” and yet alone in the woods No.6 has set himself apart from the community of the village, preferring his own company to that of others.
No. 6 appears to be training for the big break, and yet escape hasn’t been on No. 6’s mind for a long time. He’s simply keeping himself in training, not wanting himself to get out of condition. It’s a little antisocial of him perhaps. But we have no idea why No.6 took it into his head to build himself a private gym in the woods. The doctor-No.10 said after No.6’s medical that he was fit for any contingency, but didn’t have anything specific in mind at the time. Did he mean another escape attempt, or perhaps something much closer to home, such as the process known as Social Instant Conversion?! At least Number 6 didn’t end up in the Aversion Therapy Room. When No.6 asked the “lobo” man if he’d been inside that room, the reply was not in there, that he was one of the lucky ones! Lucky to be one of those citizens who have been domesticated or pacified by having their aggressive frontal lobes isolated! A barbaric operation which the charming doctor-No.86 cleaned up, no blood, no barbarism, only the use of sound waves, all very neat and tidy. And I thought the two doctors No.40 of ‘Dance of the Dead’ and No.23 in ‘Checkmate’ were bad enough! 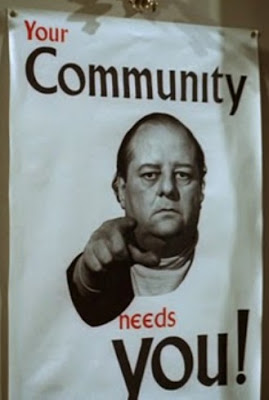 They’re right of course, quite right, Your Community needs You! It’s just a pity the welfare Committee of this community doesn’t stretch to taking more care of the individual, and stop No.2 from carrying out what is nothing more than a witch hunt!
I like the way No.6 returns to his cottage to find No.2 sat nibbling on a shortcake biscuit taken from a glass bowl of such biscuits. Make yourself at home why don’t you!
“All charmingly domestic…I think I’d like some tea.” Certain episodes have a theme running through them, this episode has tea for its theme.
No.6 cannot stand girls who can’t make a decent cup of tea, and gives No.86 a lesson in brewing a proper cup of tea. He can also boil eggs for his breakfast when push comes to shove, unless he has someone like Nadia to boil them for him! In fact for breakfast in ‘Arrival’ the Prisoner had two fried eggs with bacon, along with toast and marmalade, tea with lemon, yet touches none of it. I expect he wasn’t hungry. No.6 only appears to enjoy a hearty breakfast when it’s brought to him on a tray by a maid. And yet since that privilege had been rescinded he just has two boiled eggs for breakfast and in the day a ham sandwich, as seen in both ‘Hammer Into Anvil’ and ‘Do Not Forsake Me Oh My Darling.’ Perhaps it’s often the way with bachelors who cannot be bothered to cook for themselves. Other meals could be eaten out at the café.
There is something compelling about the way the big man nibbles daintily on a shortcake biscuit! It puts me in mind of the time when Number 6 nibbles on his ice cream cone in ‘Once Upon A Time. The question is, does Number 6 keep shortcake biscuits in his kitchen to which Number 2 helped himself, or did Number 2 bring it with him? If he likes a nibble from time to time, he might keep one or two biscuits in his pocket, I have known it done.
At the end of the day, it’s No.86 who is the weak link in the chain of command, stupid woman! She allowed herself to be out manoeuvred by No.6, and seeing as how there is nothing he cannot do, No.6 hypnotises 86 and uses her as a pawn against No.2. So that when the village clock strikes four…………
“Number 2 is unmutual, unmutual, social conversion for Number 2 the unmutual.”
“Number 86 has a confession, that Number 2 is unmutual.”
“Unmutual.”
“Look at him, an unmutual who desires to deceive you all. Your welfare committee is a tool of those who wish to possess your minds!”
This stirred up the crowd, No.2 doesn’t like the look of the now angry mob, and makes a run for the sanctuary of the Green Dome, hope he made it!

Be seeing you
Posted by David Stimpson at 07:07