Watching The Prisoner - It’s Your Funeral 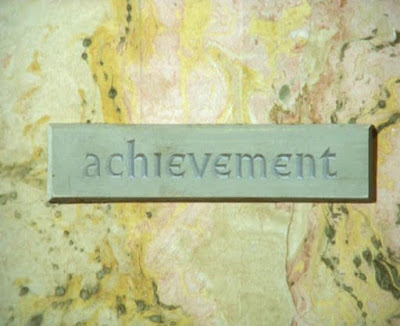 Why watch ‘It’s Your Funeral’ today? Well I suppose simply because it’s Thursday, Appreciation Day, the day when the citizens of the village show their appreciation of those who govern them so wisely. I suppose my wife and I could have watched the episode last Tuesday which would be in keeping with the public announcement made 30 minutes into the episode.
There is no date for Appreciation Day, and yet there is an announcement; “Good afternoon everyone, good afternoon, I’ve some exciting news for you. Your citizens council has officially proclaimed Thursday, the day after tomorrow as Appreciation Day, the day when we pay due honour to those brave and noble men who govern us so wisely. You will all be delighted to hear that proceedings will opened by Number 2 himself, and concluded by the unveiling of our new Appreciation Day monument, there’ll be speeches, thrills and excitement.” Where the announcer got the idea that there would be “thrills and excitement.” I don’t know, perhaps she was intimating about when the bomb in the Great Seal of Office would be detonated!


It was also difficult to decide whether or not this episode should precede ‘Hammer Into Anvil’ in the screening order because of No.6’s “jamming” activities. Either Number 6 was the original jammer carrying out all kinds of mischief against Number 2 in ‘Hammer Into Anvil,’ or he learned about jamming from the eccentric artist Number 118. And if the latter is the case, then ‘It’s Your Funeral’ should be placed before ‘Hammer Into Anvil’ in the screening order, and that would make it right. Except for the fact that in ‘It’s Your Funeral’ Number 6 doesn’t appear to know what a jammer is, or if he does he’s not letting on, hence Number 118 explains to Number 6 what a jammers are, and what they do. The problem is, we only hear part of the conversation, we do not know what is said to bring about 118 explaining about jammers to Number 6. Indeed Number 6 might have inwardly demonstrated surprise at hearing about jammers from Number 118. Because as a good friend once wrote to me agreeing with me that No.6 may well have been the original jammer, having come up with the idea himself in ‘Hammer Into Anvil.’ But then in ‘It’s Your Funeral’ he didn’t know about the existence of jammers. No.6’s activities in ‘Hammer Into Anvil’ may not have gone unnoticed by certain citizens of this community, and soon after there came a spate of so called “jamming” activities, as citizens followed No.6’s example. They call it jamming because their nonexistent plans simply jam up the works of the Village administration. There is also the similarity between the words “Hammer” and “Jammer!”
During the visual prognosis report of No.6’s daily activities he buys a copy of The Tally Ho from a kiosk. In episodes in which The Tally Ho appears there is always a close-up of the village broadsheet. However in this episode No.6 is quick to roll the paper up and secure it under his arm, making it virtually impossible to make out the content of the front page. It is possible to make out the headline is made up by three words, the first word is long enough to be “Appreciation.” So in turn I came up with the following headline. 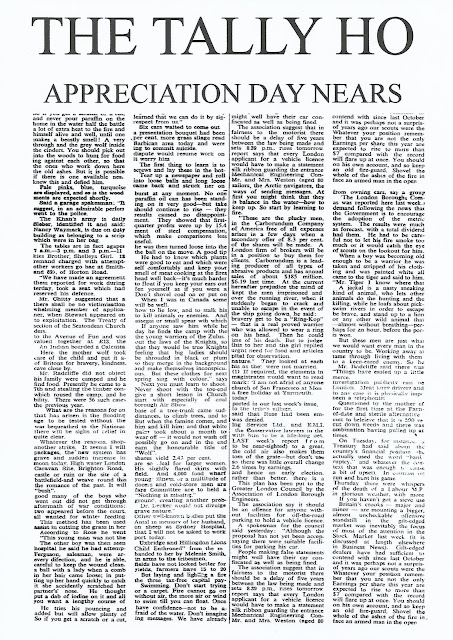 Be seeing you
Posted by David Stimpson at 05:11