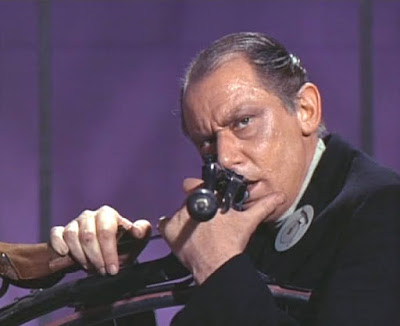 No.2 has been on the end of some rough justice by No.6, and for what, the death of No.73? It’s not as though he drove her to leap to her death through the open hospital window, she didn’t do that not until No.6 came bursting into the hospital room.
The pair of steel doors slide open, and No.6 enters the purple walled domed chamber of No.2’s office. No.2 is hanging onto the Penny Farthing bicycle for comfort.
“What are you doing here?”
“I’ve come to keep you company, I hear all your friends have deserted you, can’t trust anyone any more, pity…..Odd isn’t it, all this power at your disposal and yet you’re all alone, you do feel alone don’t you.”
“What do you want?”
“Talk, to listen.”
“I have nothing to say.”
“That’s not like the old Number 2, where is the strong man….the hammer, you have to be hammer or anvil remember?”
No.2 comes out from behind the Penny Farthing and confronts No.6.
“I know who you are.”
“I’m Number 6.”
“No! D6.”
“D6?”
“Yes sent here by our masters to spy on me.”
“Ha, ha, I’m not quite with you.”
“Oh yes, you can stop acting now you know, I’ve been onto you from the beginning I knew what you were doing, all those messages you sent and all those people you recruited I knew you were a plant, you didn’t fool me!”
“Maybe you fooled yourself.”
“What does that mean?”
“Let us suppose for arguments sake that what you say is true, that I was planted here.”
“By XO4.”
“XO4?”
“Hmmm.”
“Oh very well by XO4, to check on village security, to check on you.”
“You were.” 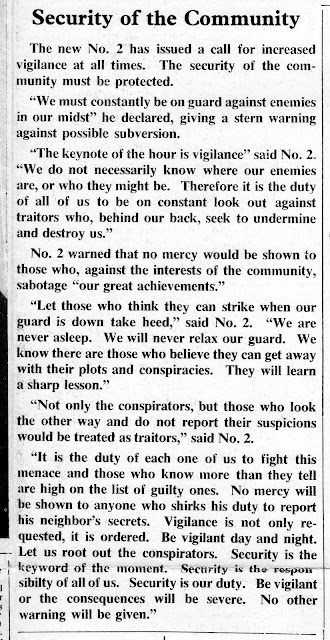 “What would have been your first duty as a loyal citizen, not to interfere, but you did interfere, you have admitted it yourself there is a name for that sabotage!”
“No!”
“Who are you working for Number 2?”
“For us, for us.”
“That is not the way it’s going to sound to XO4.”
“I swear to you….”
“You could be working for the enemy, or could be a blunderer who’s lost his head either way you’ve failed, and they do not like failure here.”
No.2 breaks down.
“You’ve destroyed me!”
“No, you’ve destroyed yourself, a character flaw, afraid of your masters, a weak link in the chain of command waiting to be broken.”
“Don’t, don’t report me.”
“I don’t intend to, you are going to report yourself.”
No.6 picks up the large red over-sized intercom and hands it to No.2. No.2 takes it and sits into the black global chair.
“I have to report a breakdown in control, Number 2 needs to be replaced. Yes this is Number 2 reporting.”
No.6 leaves the dome’s chamber, and No.2 a broken man.
No.6 deals out some rough justice of his own, his activities against No.2 could be attributed to jamming. And yet had it not been for No.2’s mental instability, his paranoia, and fear of his masters, No.6 might not have fared so well. Thinking about it all No.2 had to do was place more trust in his assistant No.14 who was after all loyal, well until No.6 had put the poison in!
What it was that brought about No.2’s paranoia in seeing enemies within the midst of the village as reported in Tally Ho article, will remain a mystery.


The following paragraph from that article is the most telling one.

It appears that “jammers” have been active in the village before the advent of ‘Hammer Into Anvil,’ and indicates that this No.2 has had more to cope with than No.73. Its doubtful that this No.2 was brought to the village because of No.6, in fact he’d probably had had no dealings with No.6, at least not until he came bursting into that hospital room. From that moment ‘Hammer Into Anvil’ became like ‘Once Upon A Time’ a two handed episode, a duel between No.2 and No.6, the hammer and the anvil!

Be seeing you
Posted by David Stimpson at 07:07