Watching The Prisoner - A B and C

Following after ‘The General’ is ‘A B and C’ and I really think these two episodes cannot be separated and should run consecutively, and so No.2’s term in office is extended even though there is a question mark over his health. The poor chap is suffering from a stomach ulcer, hence the need to drink milk in order to sooth the pain.
Like the ‘The General,’ and other episodes of ‘the Prisoner’ this episode takes place over three days, however at the same time ‘A B and C’ is unique in that the episode is clearly defined as a play in three acts. That makes it possible to watch ‘A B and C’ in its three acts over three days, which is just what my wife and I shall be doing. This evening the first act ‘A’ is watched for 13 minutes and 52 seconds. Tomorrow the second act ‘B’ is watched from 13 minutes 52 seconds until 27 minutes 13 seconds, and the day after act ‘C’ from 27 minutes 13 seconds to 48 minutes 30 seconds. I doubt very much that this episode will have been watched in this format before. 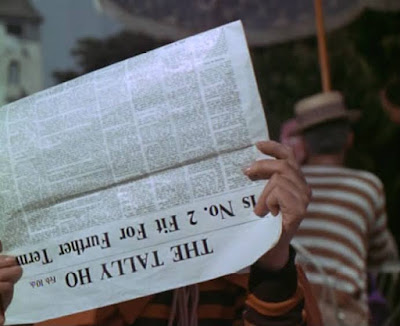 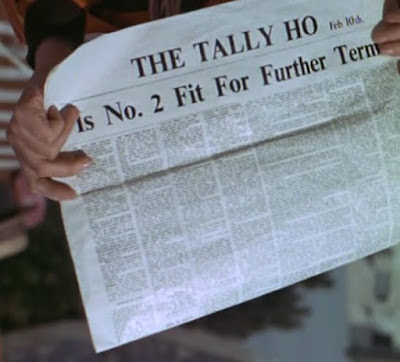 No.14’s copy of the Tally Ho has a date Feb 10th which coincidentally is the same date of The Tally Ho in ‘The Schizoid Man,’ and ‘Free For All.’ This lead to a curious theory which was first voiced back in the late 1980’s, that because the two episodes share the same date there is only one way both episodes could take place at the same time, if there were two villages….ridiculous! And yet if The General links the episode of the same name to ‘The Schizoid Man’ then the date of The Tally Ho Feb 10th not also gives ‘A B and C’ a connection to ‘The Schizoid Man,’ and vice versa because of the headline, but also date-wise to ‘Free For All’!
And when it comes to other connections there is of course Mrs. Butterworth turning up in No.6’s dreamy party, she knows it’s his lucky number! Well you mostly put people in your dreams who you know or have met, so as No.6 met Mrs. Butterworth previously in ‘Many Happy Returns’ it seems quite reasonable. However if ‘Many Happy Returns’ precedes ‘A B and C’ as is the case in the screening order, then it becomes another matter!
A favourite scene is when No.2 watches No.6 walking along a cobbled path. It’s an uncomplicated little scene, there’s Number 2 having not long got out of bed in a room somewhere in the labyrinth under The Village. He had a bad night, he said he couldn’t sleep, perhaps he hadn’t drunk his nightcap! He wanted to know what that Number 6 was doing. It’s nice to know that No.2’s first waking thought is of No. 6; well much of No.6 depends upon No.2’s future.
No.2 told the doctor-No.14 that they had researched and computed No.6’s whole life, and in using the word “computed” I cannot help but think that it was the General No.2 used in computing No.6’s whole life. However in this screening order that’s impossible because by this time the General has been destroyed!
Unlike No.2, No. 6 has been up for some hours; presumably he did drink his nightcap, and has been on his early morning walk around The Village. He knows he’s under close surveillance, but it doesn’t worry him, in fact he pauses to salute into a camera knowing full well that Number 2 is watching.
“Irritating man, he’s always walking.”
“Be seeing you.”
“No,” No. 2 replies “I’ll be seeing you!”
I think this is mere coincidence, Number 6 did once accuse Number 2 of spending his time spying, after all, all his predecessors did. But no, No.2 doesn’t spend all his time spying. He’s very much preoccupied with the idea of extracting the reason behind No. 6’s resignation, and he’s running out of time! He doesn’t even have a week, only three days which equates to the three doses of the doctor’s drug!