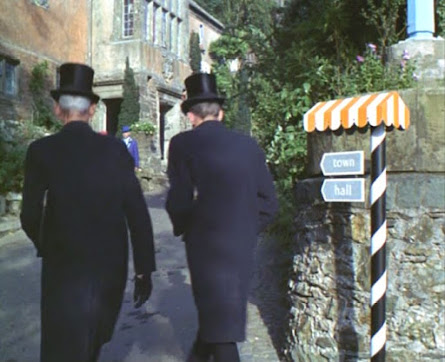 Another day in the village, and our two friends from administration are once again on their way to the Town Hall, they always pass by this way, and at the same time of day.
“Are you sure this is going to work?”
“Why shouldn’t it, we will become two top hat officials from administration going about our daily business, or at least we shall be once we’ve clobbered those two and taken their uniforms!”
“I don’t like it, two uniforms, where will that get us?”
“It will get us aboard the helicopter, then the pilot has to fly us out of the village.”
“Why should the pilot do that?”
“Because we’re on special assignment, I’ve made notes of these types coming and going.”
“What about the Observers?”
“There are two cameras covering the area by Atlas’s column.”
“Hercules.”
“Hercules.”
“How do you know that’s Hercules?”
“Because of the lion skin draped over him, Hercules took the world on his shoulders for a time while Atlas went off and did something else.”
“Well whatever it is, we’ll way lay the two top hats and drag them into the pink pavilion, and change into their uniforms. Then at when the helicopter is due to leave that’s when we make our move.”

The next day………..
“I didn’t know you knew Jujitsu!”
“I wonder what those two wanted?”
“You didn’t give them a chance to ask, you had one of them in a head lock, what’s that hold called?”
“Oh an old soldier taught me that one; it’s called a deadly Dervish death grip.”
“I’m seeing you in a whole new light.”
“Think nothing of it my dear chap.”
“Well I think we deserve a cup of tea, don’t you?”
“What about the works committee meeting?”
“Oh I think they can manage without us for a while, besides we’re in shock, we have been attacked, and you single handily fended off two desperadoes.”
“Yes I did didn’t I.....and toasted teacakes?”
“It’s the least a hero deserves!”
“Shouldn’t we report the attack to control?”
“No, after all the Observers know about it, after all they do see and hear everything.”
“Yes they will, won’t they, have seen my bravery.”
“Before you know it you’ll be up for an award.”
“Do you think so?”
“Of course not, pity about your crumpled top hat though.”
“Yes, let’s go and have that cup of tea.”