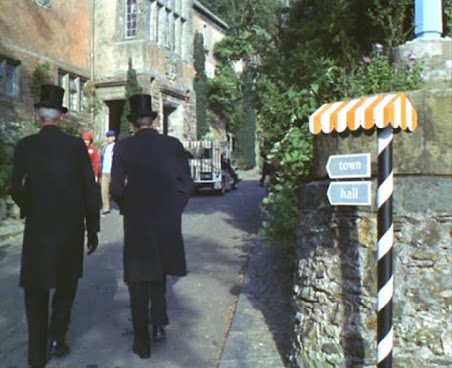 “Would you say we we’re completely impartial?”
“What, you mean in an official capacity?”
“Yes.”
“As Civil Servants?”
“Yes.”
“Well I would say we are completely impartial.”
“Treating each new interim No.2 equally would you say, without showing favouritism?”
“Without question!”
“Yes that as well.”
“Why do you ask?”
“It just makes me wonder where they find them!”
“How do you mean?”
“You saw yesterdays Tally Ho.”
“Yeeeessss.”
“That article, you don’t think Number 2 was referring to us do you?”
“Do you?”
“An increase in vigilance indeed, we’ll be watching each other before too long!”
“I should be careful if I were you, you never know who might be listening!”
“Don’t you think Number 2 has become rather unhinged?”
“Well he’s rather erratic I suppose.”
“Do you think the security of the community is at risk?”
“Only from within!”
“Within the Civil Service you mean.”
“Any Number 2 is only as good as the Civil Service which backs up his term in office.”
“You know he’s become completely obsessed with Number 6!”

“I heard he not only threatened No.6 with a sword, but that he physically assaulted him!”
“A sword, Number 2 has a sword, that’s outside the pale of the law isn’t it…what’s he doing with a sword…I’ve never seen it.”
“It’s hidden in his shooting stick!”
“I thought there was something wrong with that shooting stick.”
“Its certainly not regular village issue!”
“So security is the word of the moment!”
“Security is not a dirty word.”
“I never said it was.”
“Security is the responsibility of us all.”
“Really?”
“Security is our duty.”
“So if I said I was going to put a bomb at the front door of the Green Dome you’d grass me up!”
“Are you jamming?”
“Jamming?”
“Number 2 talks of Jamming.”

“How do you mean?”
“He said we know there are those who believe they can get away with their plots and conspiracies, jamming!”
“Sometimes I wonder where they get these Number 2’s!”
“Probably from within the Civil Service!”

“You mean he’s one of us!”
“I heard Number 2 drove Number 73 to her death.”
“I thought that was Number 6, be fair, Number 2 hadn’t laid a hand on her, well that’s what I heard, that she didn’t leap to her death until she laid eyes on Number 6 when he went bursting into the room.”
“Poking his nose in again I call it.!”
“But with Number 73 having suicidal tendencies what was the hospital window doing left wide open?”
“Are you going to hold an inquiry?”
“No, I thought we might have a cup of tea at the café before the meeting!”
“Good idea, with toast and jam.”
“International.”
“What is?”
“Jam on toast for breakfast.”
“I thought that it was Belgian.”
“International!”
“Here we are.”
At the café they ordered tea with jam on toast.
“Who eats jam on toast for breakfast? The waitress asked.
“Its Belgian.”
“International.”
“Oh…continental!”
“Whatever!”