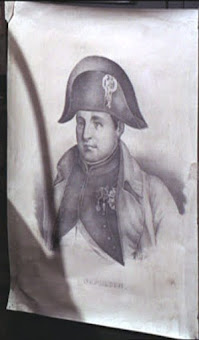 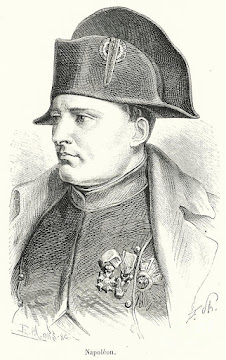 ‘Le Prisonnier – The Girl Who Was Death,’ the origin of which is unknown. True, the picture is depicted at an angle which does give it a slightly odd appearance which makes it difficult for an exact comparison. Top right, another picture of Napoleon, is a French vintage engraving attributed to the “French school,” although not exactly the same as the one appearing in Le Prisonnier episode there is a similarity. Having carried out research as I could into this picture I attempted to find another copy of the engraving, and the original painting from which this engraving had been taken in order to identify the artist but without success. However I did manage to find this corresponding portrait. 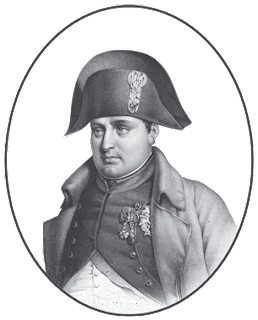 Albeit the image is a modern day representation of the original engraving, there can be no doubt that it is identical to the one top left. Having trawled through a large number of pictures and paintings of Emperor Napoleon Bonaparte this is the only picture I could find identical to the one used in ‘The Girl Who Was Death.’      Although I was able to locate pictures of Empress Josephine playing a harp, and lounging in a chair, I was unable to find any corresponding pictures of Empress Josephine as seen selotaped to the cavern wall with Napoleon! However the search will go one.
There is also a “Photogravure”{an image produced from a photographic negative transferred to a metal plate and etched in} of Napoleon Bonaparte standing on the deck of a ship.

Napoleon Bonaparte on board the British ship Bellerophon 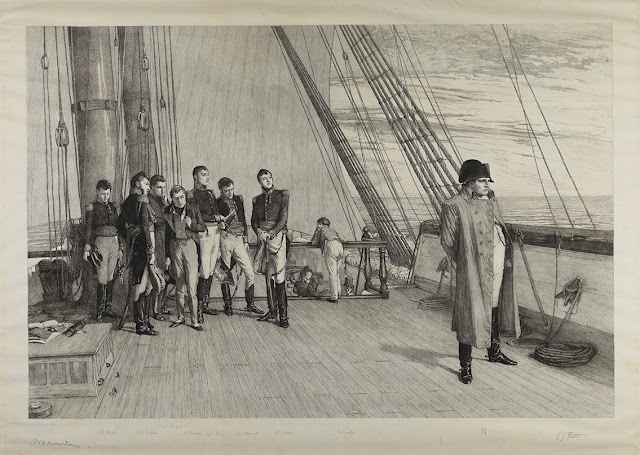 Photogravure from a painting by Orchardson. An end to conflict: Napoleon’s surrender to HMS Bellerophon
On 10 July 1815, HMS Bellerophon was guarding the French port of Rochefort when a French vessel bearing a flag of truce approached. On board were General Anne Jean Marie Rene Savary and the Comte de Las (Count of) Cases, with the first announcement of Napoleon’s consideration to surrender to the British.

Six weeks after his disastrous defeat at , Napoleon faced an uncertain future. After his abdication, he was unwelcome in , with his capture sought by Prussian and Austrian forces.

On , HMS Bellerophon was guarding the French when a French vessel bearing a flag of truce approached. On board were General Anne Jean Marie Rene Savary and the Comte de Las (Count of) Cases, with the first announcement of Napoleon’s consideration to surrender to the British.

There was further contact between the French party and the Bellerophon over the following days.

At on 14 July a vessel approached the Bellerophon. The Comte de Las Cases was again on board, this time accompanied by General L’Allarand. They had a letter from Napoleon, wishing to discuss the terms of General Bonaparte’s surrender.
After leaving Bellerophon, Comte de Las Cases returned at the same day with a letter from Napoleon’s General, Count Bertrand revealing that Napoleon was currently on and fully prepared to surrender.

Napoleon’s arrival on the Bellerophon is recorded in the log for the ship dated .

While in custody Napoleon and his entourage were treated like guests, with the former emperor given access to the Great cabin of the ship. Napoleon wanted to travel to , where he hoped to gain asylum; upon refusal of this by the British, he hoped to be allowed to live out his life in .
Escorted by HMS Myrmidon, upon arrival in the Bellerophon anchored at Brixham. It then took    Napoleon to , where he was held aboard the moored Bellerophon and not allowed to set foot on British soil, much to his annoyance. Over the following weeks, the British government considered the fate of the ship’s famous prisoner.

Despite the British authority’s attempts to keep Napoleon’s presence in a secret, word began to spread about his residency on the Bellerophon, causing a vast number of small vessels to swarm around the ship in the hopes of catching sight of him. HMS Liffey and HMS Eurotas were anchored as guard ships in the hopes of dissuading these smaller ships.

Eventually a decision was made to designate Napoleon and his entourage as ‘Prisoners of War’, with the in the chosen as their place of exile. This was a fate far removed from the ‘small estate’ where Napoleon wished to live out his days at in .

While many of the loyal officers in his entourage chose to follow him, the surgeon in Napoleon’s company did not wish to journey to . Barry C O’Meara, the surgeon of the Bellerophon, offered to make the voyage with Napoleon instead. For the voyage to , Napoleon was transferred to HMS Northumberland.

In his statement, Maitland revealed that General Bertrand had told him that in thanks for his kindness and hospitality, Napoleon wished to give the Captain a box containing a diamond encrusted portrait. Due to his position, Maitland felt that he was unable to accept such a gift, and he notes his actions to inform Napoleon and his party of this without causing offence.

Before leaving the Bellerophon, Napoleon had not been granted his desired audience with the Prince Regent. He revealed to Captain Maitland that part of his wish to meet the Prince was in the hope that he could recommend Maitland for promotion to Rear Admiral, as an appreciation of the hospitality that the Captain had shown him (Maitland would eventually rise to the position of Rear Admiral by the time of his death in 1839). Napoleon told Maitland that he considered him ‘a man of honour’. 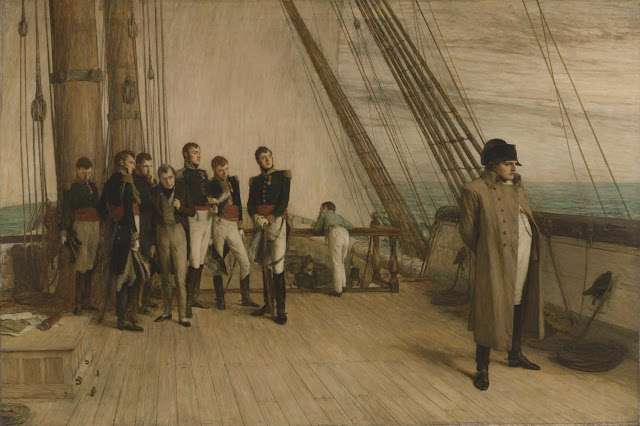 Orchardson was trained in , and moved to in 1862 where he made his name as a painter of historical genre scenes. His admirers included Whistler, Sickert and Degas. He is now best known for his modern moral subjects such as The First Cloud, in the Tate Collection. This painting shows Napoleon on board HMS Bellerophon bound for , where he remained in exile until his death in 1821. The deposed Emperor stands on the deck, isolated from the group of ['naval' out] officers on the left, who watch him with curiosity as he looks out to sea, contemplating his fate.        {Information source Wikipedia}