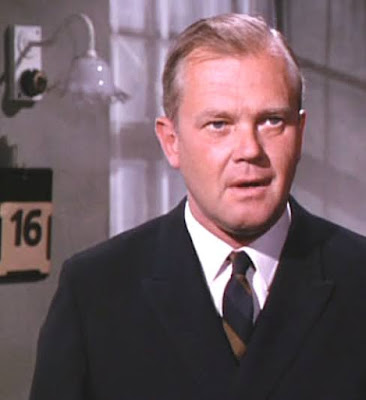 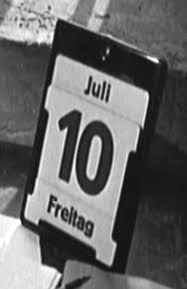 As you know I have prided myself on trying to bring something new to readers of my blog. And until quite recently I had resigned myself to thinking my days of making observations regarding the Prisoner were well and truly at an end. So imagine my surprise, while watching the 1954 film ‘The Colditz Story’{a film I have watched umpteen times by the way} when I spotted something Prisoner related which suddenly grabbed my attention, making me sit up, grab the remote and roll back the film. It was this, a continental day date calendar sat on a desk in a German guard’s office, as seen in the black and white insert image on the right! Such a calendar can also be seen in the 25 minute ‘Danger Man’ Episode ‘Under The Lake’ as I saw the other evening. On the wall behind the hotel reception desk. Such a calendar is seen hanging on the wall in the barbers shop in the episode ‘Do Not Forsake Me Oh My Darling’ over the Colonel’s shoulder, except it is incomplete. Both the cards for the days and months of the year are missing, and it is this deficiency which, over the years and decades, has caused fans of the Prisoner series to call this device into question, whatever is it? But if no-one knew before, we do now, as the mystery is solved.