I imagined that I had long made my final observations into ‘the Prisoner,’ but no, for I find I have been able to squeeze a little more out of that series documented within this article. I don’t know if you are in anyway familiar with the ITV television series from 1968, called ‘Virgin of the Secret Service’? If not I would hardly be surprised, because it only ran for one series, it was a tongue-in-cheek adventure series set in the early 1900s, and followed the adventures of Captain Robert Virgin, a gentleman officer working for the British Secret Service. Each episode would see him dispatched to different parts of the world by Colonel Shaw-Camberley to do battle with enemies of the . Virgin's principal adversary was always Karl Von Braunner, a German spy who would always be dreaming up “a plan of the utmost simplicity” with which to take down the Empire and the Secret Service. In the episode ‘The Professor Goes West,’ Von Braunner kidnaps a scientist, Professor Whitestone {who has invented a machine for detecting oil in the ground} to a ranch just outside the frontier town of . The land belongs to a trigger happy ranch boss called Big Jack played by David Bauer, who has a nearby frontier town under his heel. Virgin is sent to Gravestone in order to find the Professor.
So what has all this to do with the Prisoner? Well it’s more to do with Living In Harmony,’ Not just because of the Professor’s abduction to an American Frontier town, which is a trivial point I freely admit. Also the portrait of Lillie Langtry appears on a wall in Big Jack’s ranch house, similar to the one in the Silver Dollar saloon in ‘Living In Harmony.’ 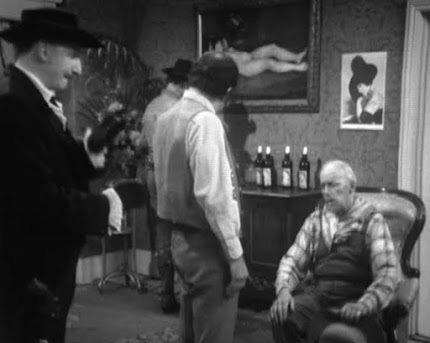 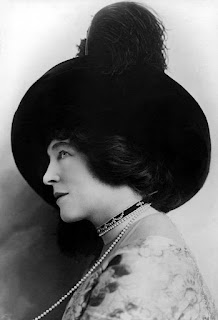 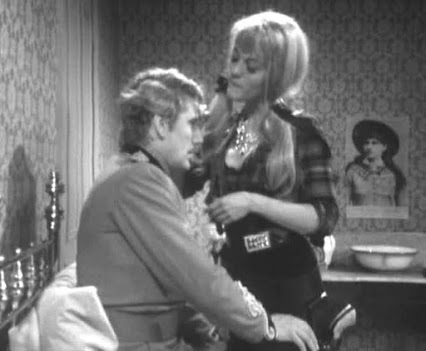 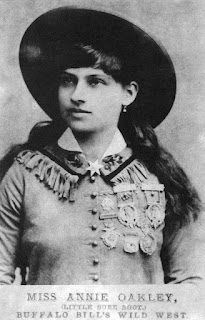 While on a wall in a room in the saloon, hangs the poster of Annie Oakley, the same as the framed Portrait hanging on a wall in the Silver dollar Saloon. Trivial points I agree, but the similarity cannot be denied. But wait…there is more.

Now we come to the most remarkable thing regarding ‘The Professor Goes West.’

Pictured left is David Bauer as the Judge in ‘Living In Harmony,’ who has the town of harmony under his heel. In the episode of ‘Virgin of The Secret Service - The Professor Goes West,’ David Bauer’s character Big Jack, in the same way, has the town of under his boot. During the scenes when Big Jack is in his ranch house, he is seen wearing a plain costume of shirt, trousers, and a waistcoat with studs making the shape of two horseshoes on it. However my eyes lit up when Big Jack, pictured below, goes to Gravestone, because when he’s in the saloon David Bauer has had a dramatic change in costume, so much so that instead of Big Jake, I saw the Judge from ‘Living In harmony,’ except he’s grown two sideburns!
David Bauer {pictured below} is wearing the exact same costume in ‘The Professor Goes West’ as he does in ‘Living In Harmony,’ the only difference is the watch chain on his waistcoat! 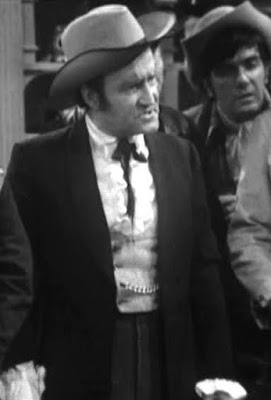 As the Prisoner episode ‘Living In Harmony’ was produced long before ‘The Professor Goes West’ of ‘Virgin of The Secret Service,’ I can only imagine actor David Bauer, for reasons of his own, decided to keep the Judge’ costume for himself. Otherwise it would be far too much of a coincidence for the same actor, to wear the exact same costume, in two separate episodes of two totally different television series, which were produced months apart!
More than that, why should David Bauer, whilst wearing a perfectly good costume for a character in the American Wild West, suddenly change that costume for a scene in the saloon which makes him look like he’s reprising his role of a former character, the Judge from ‘Living In Harmony.’
Whether or not it was David Bauer’s choice to change his costume in ‘The Professor Goes West’ we shall never know. I see no reason why he should change his costume like this, after all his character was one of a rancher, and he wore a rancher’s costume. Perhaps because Big Jack was dealing with Virgin and his sidekick in the saloon, that David Bauer thought it would help him in the scene to reprise his character of the Judge in that scene, or at least to wear the costume. But that’s merely a guess you understand, otherwise why the need for the change in costume?


Don’t you find that curious? Well I find it curious!