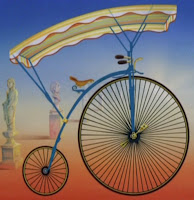 This is without doubt a resounding symbol, which Patrick McGoohan attributed to the speed of progress of technology. That the penny farthing bicycle suggests that perhaps man should slow down when it comes to progress. That man should assimilate what he has achieved so far. Well that was back in the late 1960's, and technology never slowed down. In fact technology has if anything, speeded up!
As for the canopy of the penny farthing bicycle, symbolic perhaps how the government takes care of it's citizens. By forcing people to wear seat belts, crash helmets back in the 1960's and 70's. And in more recent times, cycle helmets, and Health and Safety which has gone mad. Stopping children from playing 'Conkers' in the plaground, and generally any form of recreation which may put peoople in harms way! You see they take care of you, for as long as you live. And today 'they' want you to live as long as absolutely possible!
Be seeing you
Posted by David Stimpson at 08:12