It Must Have Come As A Terrible Shock 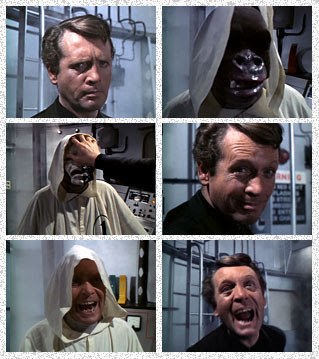 This is the moment No.6 came face to face with himself during the Fall Out. Mind you it's not the first time, and it's not unusual for the village to have twins residing in it. There was the Gardener and the Electrician in Arrival. Then the photographer-No.113b and the man who dispensed The Tally Ho outside the Town Hall in Free For All.
They say that each of us have a double somewhere, but for No.6 to have a pair of doubles would seem a bit too much to believe.
The use of the ape mask is said to demonstrate evolution of man, something like that of the film 2001, now there's a film ending I have never been able to understand. No, don't tell me, I'd rather live in ignorance!!!!!!! By the way, did you know that the shot of the Universe seen in The Alternative Chimes of Big Ben, was taken from the film 2001? The film was being shot at MGM Studios at the same time as the Prisoner.
But back to doubles for a moment. I've been to Prisoner conventions, portrayed No.6 to the point that I've become the Prisoner, and have been taken for Patrick McGoohan on many, many occasions. But if anyone said to me today "Are you Patrick McGoohan?" I'd say "God I hope not, he's dead!" No offence Pat. 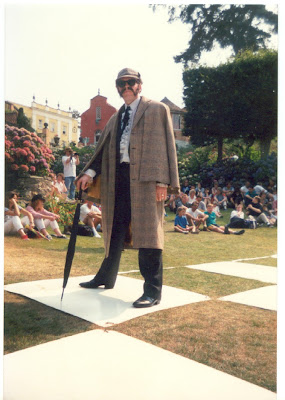 This is me, Mister X at a Prisoner Convention. The first time that the boxing scene from The Girl Who Was Death was re-enacted.  Be seeing you
Posted by David Stimpson at 08:31