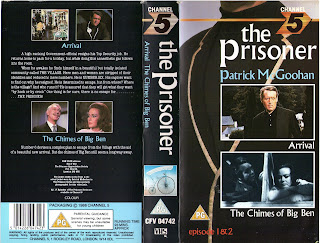 In the United Kindom in November 1986 the first two videos of the Prisoner were issued, with seven more to follow in the ensuing months of 1987. It was the first time that the complete series of the Prisoner had been released on video. I still have a set of these nine videos, which still play as good today as they did back in 1986-87. In 1982 there had previously been Precision Video produced by ITC, but only eight episodes were issued. In 1984, in the United States of America, MPI released the Prisoner on video. But then came this, also produced in America by MPI in 1990. 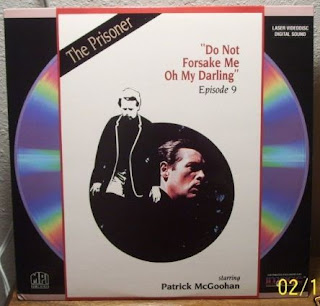 This, no it's not a cd, or DVD, this is an epsiode of the Prisoner on laserdisc. January 1990 saw three episodes of the series issued, and three firther episodes the following month. One episode per disc at a price of $19.95. As far as I can ascertain, only nine of the seventeen episodes were released on laserdisc.
Be seeing you
Posted by David Stimpson at 08:30