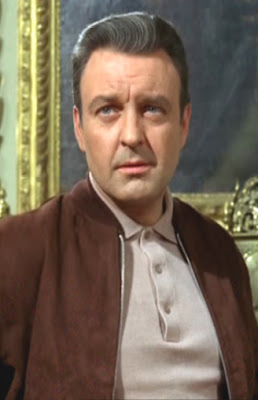 I find that the things we don't see in the Prisoner are often more intriguing than what we do see. Take the Colonel here of Many Happy Returns. I sometimes think what his reaction might have been when the aircraft with his ex-colleague didn't return? Did he order a search to be made for the lost aircraft? After all he knew the search area for the village. Or it might have been that some higher authority put a stop on the Colonel from instigating a search. I think the Colonel was genuine enough in his approach to his ex-colleague No.6, and the story he weaved about his abduction and the village. And I'm sure that inwardly at least, the Colonel would have wondered about his ex-colleagues second disappearence, which might very well have gone to confirm the Prisoner's story in the mind of the Colonel. But whether or not he was powerless to do anything about it, to help No.6, well the Prisoner's continued confinement is proof that the Colonel did nothing!
BCNU
Posted by David Stimpson at 09:20