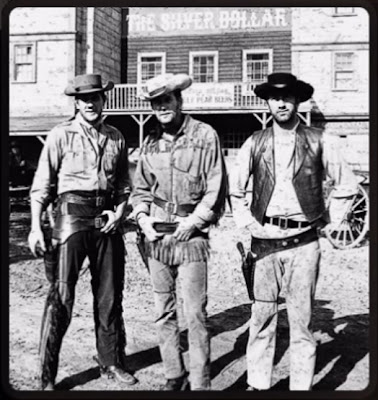 Three more desperate desperados you would not wish to meet! Frank's the one in the middle by the way.
When you think about it, seeing as how Frank Maher was Patrick McGoohan's stunt-double on the Prisoner, he actually played the role of No.6 almost as much as Patrick McGoohan, especially during the episode of The Schizoid Man. Yet Frank Maher never received a credit, except for in Living In Harmony
I was fortunate enough to meet Frank at a Prisoner convention at Portmeirion, a nice guy Frank.
BCNU
Posted by David Stimpson at 09:09