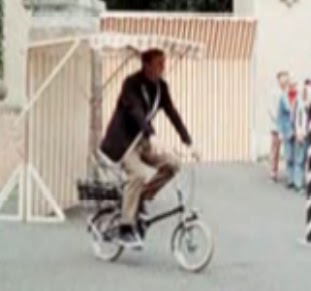 I know that there are those who in the 2009 series of THEPRISONER who go about impersonating Two. They are called Un-Two's, he may say that he is Two. He may appear in a dishevelled  state, but you will know he is not Two, because he is not Two! But this picture is from the 1960's series, and that's not a Two impersonator, but Number Six on that canopied bicycle, or is it?
Certainly he looks like Six, he's dressed like Six, but perhaps he's the new Number Two. Because the new Number Two dresses exactly like Number Six!
Be seeing you
Posted by David Stimpson at 08:11