The Great Seal Of Office

As Worn By No.2 At All Ceremonies. 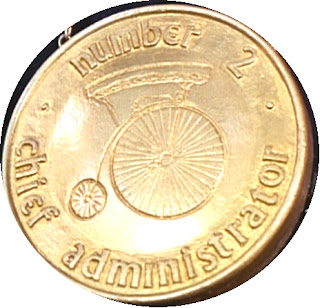 Its hollowed out! Its packed with explosive.......and will be detonated by radio!

But really, did it matter who was wearing the Great Seal of Office, either the retiring No.2 or the new No.2. If the plastic explosive had been detonated, then more people than the retiring No.2 might have been killed, or injured, with blood, guts, rent flesh and smashed bone everywhere! If the watchmaker wanted to use the bomb to its greatest effect, he would have detonated it while the Great Seal of Office was lying on the crimson cushion.
Just a minute, just a minute! The Great Seal of Office is always worn by No.2 at ceromonies is it? Well No.2 wasn't wearing it at the dissolution of the out-going Council in Free For All, nor indeed at any time during the election period! In fact No.2 is only seen wearing this Great Seal of office during the Appreciation Day ceremony! And that is where the Prisoner series suffers, through too many scriptwriters, causing a lack of continuity between the episodes. The impression is given that they were making it all up as they went along, to which all intents and purposes they were!  Be seeing you.
Posted by David Stimpson at 08:52