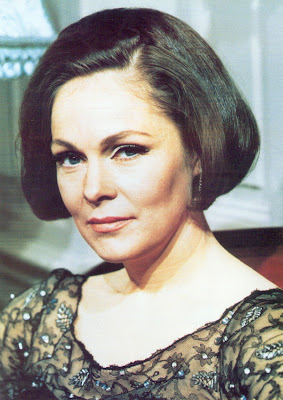 Now a middle aged woman, and still unmarried! Janet was in all probabilty one of the last Debutantes of the 1950's. And having been so, one would have thought, as would her father Sir Charles Portland, that being a debutante Janet would have been paired off with a boy of good family and breeding. But it was not to be It has been written that Janet was attracted to the Prisoner by his good looks, but what attracted the Prisoner to Janet is not quite so clear.
When we meet Janet, it is when she is a forlorn woman, having lost her fiance, not knowing where he is, whether he's alive or dead, but living in the hope that one day her lover will retun to her. And possibly her father was living in the hope as well. Because having put his daughter through the very expensive process of finishing school, and not having found herself a husband as a debutante, no doubt Sir Charles thought he would have his daughter on his hands for the rest of his life. So it's not at all surprising that he dropped his secateurs when the Prisoner asked for his daughters hand in marriage, I bet Sir Charles couldn't believe his luck! But then his hopes were tragically dashed when Janet's fiance went and disappeared!
It has also been written that Janet is a child of the sixties - rubbish! She's nothing more than a middle aged spinster! The 1960's has been described as a time when women even more then men were breaking out of their behavioural straightjackets. expanding their cultural horizons and discovering fulfilment in mental and sexual freedoms - well that might be true in some cases, but not Janet here. I cannt belive that she has discovered sexual fulfilment and freedom! I mean just look at her hair style, it's formal, it's plain, as is Janet herself. And look at the kind of men she attracts at her birthday party, mostly middle aged, and old men, well as I say, Janet herself is middle aged, so her bithday party was never gong to be a rave.
She probably does the social rounds. Janet is the homely kind of woman, concerned with the hairdresser, shopping for clothes, has her own dress-maker. She doesn't work, probably has a generous allowance from her father. Janet has not embraced the sixties, as her dress sense is still in the 1950's, as is her hairstyle!
So why would Janet marry a man such as the Prisoner? Well only a woman can answer that one. Why would the Prisoner want to marry Janet? Perhaps he saw the marriage as a way of bettering himself within Sir Charles department of the Foreign Office. And Sir Chalres? Well he welcomed the marriage, because it meant that he would get his daughter off his hands at long last!  BCNU
Posted by David Stimpson at 09:21