The Village Entertainments Committee
"The Village's Got Talent" 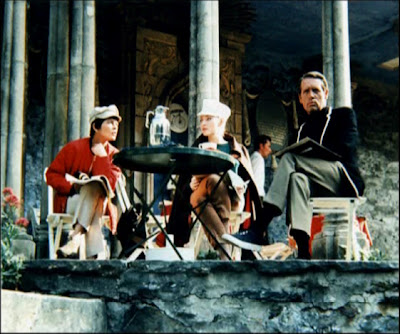 'What did you think of the three silly twerps?'
'You mean the trick being there's only two of them?'
'Well they made me laugh!'
'And 99's escapeologist act, what did he call himself?'
'Harry Houdini. Rumour has it he's a member of the Escape Committee.'
'Is he still tryng to get out of those handcuffs?
'Yes. I think he's going for the record....it's been three hours twenty-two minutes so far!'
'Well if he can't escape those handcuffs..........what price the Village?'
'I thought the Magician was good.'
'Yes. It's just a pity about the Guillotine Illusion.'
'Yes. I understand Twenty-two's funeral is tomorrow afternoon.'
'And Number fifty-one, the human cannon ball?'
'We got a post card from him yesterday. He sends his regards from.......well he doesn't actually say where he is!'
'Well pass it on to the Escape Committee will you.'
'Yes Number Two.'
'There's always Number Thirteen, the human inferno!'
'He's still in hospital!'
'Number Ninety-Three?'
'Yes, what a wounderful.......noise she makes!'
'Number Forty-Eight, he sang Sonny Boy beautifully.'
'I found it a bit wearing, after Eight, Thirty-Three, Eighty-Six, and Sixty-Two had sung the same song.'
'Well there's always Baldrick!'
'Baldrick, we're not supposed to use names!'
'Oh, you mean the Slug balancing act!'
'I've got him down as being an impressionist.'
'Charlie Chaplin, wasn't it?'
'Either way, we could get the Slug some sort of sparkly costume...........All agreed? Good.'
Posted by David Stimpson at 08:48