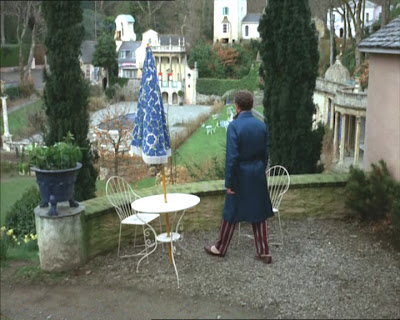 No.6 wakes up to find the Village deserted. There's no-one about, no-one to be seen, and everywhere is locked up, save the Green Dome. But No.2 is not at home!
On first impressions it could appear that the good citizens of the Village have escaped, everyone that is, except No.6. No, wouldn't that have been a novelty!
I used to think that Thorpe of Many Happy Returns is the No.2 of Hammer Into Anvil, but now I know that is impossible. Why? Because when No.6 goes into the Green Dome, into No.2's offcie, there is an oversized red curved telephone on the desk, and only two No.2's ever used that particular telephone, Colin Gordon of A B & C and The General, and Patrick Cargill of Hammer Into Anvil. Why couldn't it have been Colin Gordon who was last in the position of No.2? Well I would suggest that while Patrick Cargill was filming as Thorpe, he was also there at MGM Studios to film the set scenes of Hammer Into Anvil, which the set of No.2's office in Many Happy Returns would have been  set up for, because of the oversized, curved, red telephone.   BCNU
Posted by David Stimpson at 08:14