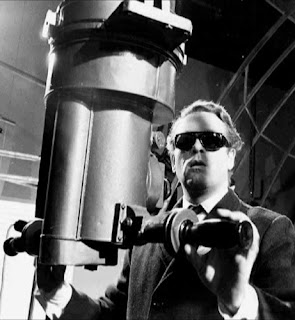 'Up periscope!' What's the game this time? Don't tell me No.6 is all at sea - well he will be when those two security guards get their hands on him!
I watched the projectionist, sat at this periscope in the Projection Room, and No.6 is pictured here doing the same, the only difference is, No.6 doesn't know why, or does he? He is pictured here when various departments were reporting in to Control as preparations were being made for another of the Professor's lectures in The General. So why the need for the Periscope? To be perfectly honest, I've no idea. Although I have seen factual film of men sat at periscopes in a room, just like the Projectionist and No.6 does, and in that case I think it had something to do with the testing of Nuclear bombs in the 1950's, as far as I can remember that is. If only I could remember where I've seen that film...perhaps it was on YouTube....no, it was a documentary on television, but I cannot remember what.
Be seeing you
Posted by David Stimpson at 08:29