X'ed Out And Filed Away - Somewhere in that Long Room! 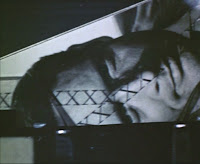 During the opening sequence, after the Prisoner has handed in his letter of resignation, his photograph on a computer print-out card is X'ed out and filed away under RESIGNED in a grey filing cabinet in that long room of filing cabinets.
I suppose one could be forgiven for thinking that the picture is that of John Drake, indeed as a boy of twelve back in 1967, that is the impression I was given. However, it is in actual fact a promotional photograph of Patrick McGoohan, which is also used for the election placards in Free For All, and in the episode of Do Not Forsake Me Oh My Darling, it would seem that it is Patrick McGoohan who has resigned, and been filed away in that grey filing cabinet! What was it the Prisoner told No.2 'I will not be pushed, filed, stamped, indexed, briefed, debriefed, or numbered!' Well of course there is no-way that the Prisoner could have known he had been filed in this way. Of course the Prisoner could have been pushed into resigning, no longer believing in the job he was doing which brought about his resignation. As for being stamped, well he's certainly had his card marked! Briefed, this happened during the aerial tour of the Village. De-briefed by the first No.2 over breakfast, and numbered by the Supervisor! 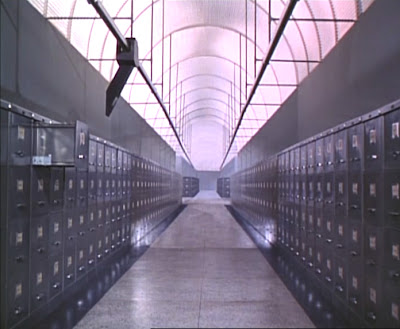 I've sometimes wondered what it is they do with all this accumulated information in those grey filing cabinets. It puts me in mind of the end scene of Indiana Jones & The Raider of the Lost Ark, where the Ark is locked in a crate, and the crate put in a huge warehouse full of crates, perhaps never to be looked upon again........................................ Be seeing you.
Posted by David Stimpson at 09:52