A Faviurite Scene In The General 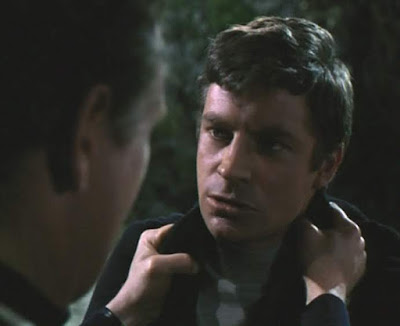 In ‘The General,’ what’s Number 12 doing lurking in the bushes? In fact what was he doing on the beach at that time of night, its almost curfew time! Obviously he was there to retrieve the Professor’s tape recorder Number 6 buried in the sand. It then follows that he must have seen Number 6 dig it up after the Professor had buried it in the sand. For why? So that he could micro reduce the Professor’s message about Speedlearn and the General, and transmit that message subliminally to the students. Think of it, if that message had actually been transmitted, the entire people of The Village would have but one thought……to destroy the General. This would cause everyone to riot through the streets, searching here, there, everywhere until they found the General, when they would smash the computer to pieces, behaving like Luddites!
But what happened then, after Number 6 had wrestled Number 12 out of the bushes? He asked Number 12 if there was anything he could do for him? Number 12 suggested that Number 6 wanted to get out of The Village, and so handed Number 6 his passport. After all Number 2 had offered Number 6 a deal in exchange for the tape recorder. That deal was later cancelled by Number 2, seeing as the Professor didn’t need the tape recorder any more, but then neither did Number 6. But Number 12 did, in order to make a micro reduction of the Professor’s message, so in handing the tape recorder back to Number 6, who then gave it back to Number 2 because he no longer needed it, would have made it more difficult for Number 12 to get his hands on it again! But at least on the beach Number 12 was able to give Number 6 an important lesson about what not, when. Because Number 6 simply gave the wrong answer!
Actor John castle as Number 12 appears to have been another of those actors who were on the wrong end of some rough treatment from Patrick McGoohan when he wrestled John Castle from out of those bushes. He has never talked about his experience working on ‘The General,’ or with Patrick McGoohan.
And where was Fenella Fielding during the production of ‘the General?’ Because it was actor Al Mancini who made the announcement about it being 15 minutes to curfew!

{Luddites were textile workers in the 19th century who protested against newly developed labour-economising technologies, primarily between 1811 and 1816. The stocking frames, spinning frames and power looms}