Once Upon A time

Watching ‘Once Upon A Time’ last night I had the strange feeling that what I was watching on the television screen had happened yesterday. No.2 having been brought back to the village, his being watched by the Guardian until he tells No.1 to remove it before admitting that he was, is a good man but that if No.1 gets No.6 he will be better, and suggesting that Degree Absolute is the only way. And that night as I sat watching No.2 recite nursery rhymes to the slumbering No.6 on the television screen I said to Morag that’s happening now right this minute!
And for the first time last night, in all the times I have watched this episode, as the butler took the headmaster’s mortar board, gown, and cane out of the wardrobe I saw the red anorak worn by No.8 in ‘Living In Harmony, the Prisoner’s suit, and the buckskin jacket worn by the stranger {No.6} in ‘Living In Harmony.’ Except, that buckskin jacket shouldn’t be in the wardrobe because it shouldn’t physically exist, as we only see No.6 wearing it during his role playing in Harmony! 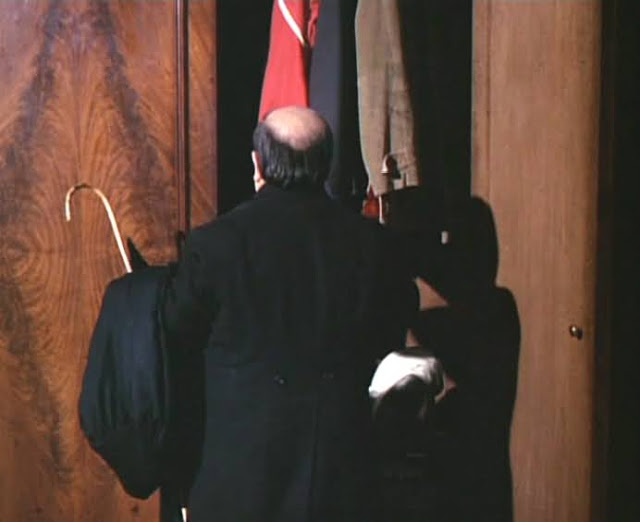 And now this morning No.2 wakes No.6 to ask him if he wants to go walkies, and telling him to wash and dress quickly and he’ll show him some nice things. And after a perambulation around the village, and the purchase of an ice cream, they return to the Green Dome from where No.2 takes No.6 to the Embryo Room to begin what No.2 is pleased to call their deliberations. The is already there of course, standing in the Embryo Room, with the door shut and the lights out in the pitch black. And there they will be for the next week!