“Plan division Q all set, its working beautifully…….dead on schedule you could say………No sir, just the way you ordered it….…. The people are already gathering it will be very spectacular………… No nothing can go wrong now I’ll stake my future on it……….. Well thank you sir, I know you will.”
Why is it I want to tell this interim Number 2 to get up off his knees? And why is he speaking to Number 1 using a yellow telephone, when in previous episodes it was more usual to use a red one. It might have been an idea to get him to use that red oversized curved telephone, the one actor’s Colin Gordon and Patrick Cargill were forced to endure. This interim Number 2 assured Number 1 that nothing could go wrong, well whenever did a plan involving Number 6 work? He also staked his future on the plan succeeding, well as it worked out this new Number 2 didn’t have much of a future. We can only speculate as to what happened to him. Was he instantly removed from the position of Number 2? Or was he allowed to replace his predecessor to become the permanent No.2, forced to work for the good of both the village and its community, behind the scenes as his predecessor had done, during the forthcoming year. And so made to sweat from that day forward, over what his own fate may be 365 days from then, on Appreciation Day!
But returning to that curious over-sized red curved telephone, I have arrived at the conclusion that the introduction of that prop was simply to make certain actors look ridiculous! I mean just look at the reaction of Colin Gordon and Patrick Cargill when they have to use it. Yes that curious looking prop does appear in a couple of other episodes ‘The Girl Who Was Death’ and ‘Fall Out,’ but in all the seventeen episodes of ‘the Prisoner,’ only these two actors used this prop, when other actors and actresses playing the role of No.2 used a telephone to speak to No.1, they used the usual 'L' shaped telephone. 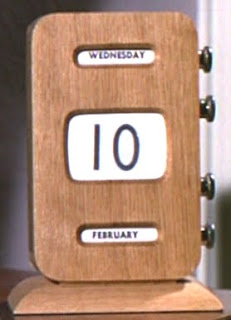 February 10th is the only date used in the village, and on this morning 54 years ago, according to the day/date calendar on the bedside table, Number 6 woke up to find a local election was about to take place. What’s more he is invited to become a candidate and stand for election for the position of Number 2! That is not all, because tonight Number 6 will drink his nightcap of hot chocolate before going to bed. But despite the sedative in the nightcap, Number 6’s sleep is still light, so it is quite on the cards that any disturbance will wake him. So his sleep is deepened for him by use of a pulsator device hidden in the overhead light. While that is taking place, two medics come for Number 6, both of whom are wearing dark tinted goggles which presumably protect their eyes from the effect of the pulsating light. One of the medics administers an injection into 6’s left forearm before they take him from his bed and place him on a stretcher. His wristwatch and day/date calendar are removed from the bedside table. The wristwatch is then given to Curtis because during the rest of the episode Number 6 wears a watch with a stainless steel band. As for the day/date calendar it never appears in Number 6’s cottage again, neither does the one removed from the kitchen. But Feb 10th appears even before the onslaught of both ‘Free For All,’ and ‘The Schizoid Man’ the date appears in ‘A B and C’ on The Tally Ho broadsheet along with the headline ‘Is No.2 Fit For Further Term’ And yet as we know this is the same edition of The Tally Ho used in ‘The Schizoid Man.’ the end of the same headline ‘Is No.2 Fit For Further Term’ can be seen. And yet Number 6 cannot hang around long, because by Feb 22nd he has to set sail on that day if he’s to arrive in on March 18th!
My wife and I have come to the end of watching ‘the Prisoner’ as in real time, if that wasn’t curious enough, back in July they watched ‘A B and C’ in three acts over three nights. Thinking about those three days of ‘A B and C’ it made me wonder what No.6 did during those three days. I know he met up with No.14 on the lawn of the Old People’s Home and paid No.2 a call on the first day, and on the second day he followed No.14 through the village, and the woods to the laboratory. No.2 caught No.6 on camera walking, “Irritating man!” But surely No.6 cannot spend all his time walking around the village. Nor do I see him sitting about wondering what they have been doing to him. Well he would wonder, but No.6 isn’t the type of man to dwell upon it.
In ‘Fall Out’ the Prisoner is given his own suit if clothes, the supervisor told him that it was because they felt he would feel happier as himself. Is that why No.48 is also wearing his own clothes? And what about the Professor and Madam Professor, did “they” think they would feel better as themselves? And of course they are not given numbered badges to wear, is that because they are not allowed to go out into the village? The Professor and his wife are under house arrest! The Professor and

Madam Professor are played off against each other by No.2, each are essential to the other. The Professor does as he is told to protect his wife, and Madam Professor makes sure he does for his own good. Mind you they did live in a very elaborate, well decorated house which might have been the Manor House as noted on this village poster. Obviously Madam Professor would have had to give up the house after the death of her husband, possibly her art seminars as well, and go and live in a much smaller cottage and get a proper job, as a waitress at the café, or a maid. And seeing as they put The Professor and Madam Professor in the Manor House, equally they could have put No.6 in Government House according to his previous position. Ah but then again he had resigned, and no longer worked for the Government, so perhaps that’s why they put him in the Roundhouse! I looked up the definition of “Roundhouse.” Originally the uppermost room or cabin of any note upon the stern of a ship. And it is the proper place for the Master; and the deck or cover over it is named the Poop. Roundhouse is defined in Blanckey's dictionary (1740s) as spaces under the poop. So perhaps No.6 has a Naval connection, after all James Bond was recruited from British Naval Intelligence, as was Philip Calvert {When Eight Bells Toll}, so why not ZM73?
And I enjoy the triviality of ‘the Prisoner’ as with the time when No.6 changed his socks in that air vent in the laboratory in ‘A B and C, also the way No.2 had the back of his head to the camera when No.6 unmasked him. It’s a wonder No.2 didn’t recognize the back of his head, mind you it’s very rarely one gets to see the back of ones own head! The slippers No.6 is given at the time of his medical in ‘Arrival,’ are quite obviously McGoohan’s own, otherwise he’s been given someone else’s well worn slippers! And those spectacles No.6 wears as part of a disguise in ‘Dance of The Dead,’ again obviously McGoohan’s own spectacles, otherwise the prescription lenses could have impaired his vision, well not unless they were plain glass lenses as he once wore in ‘Danger Man!’
When No.6 sits on an outlook on top of the cliffs tuning in the pocket transistor radio, he picks up a transmission “Nowhere is there more beauty than here. Tonight when the moon rises, the whole world will turn to silver. Do you understand, it is important you understand. I have a message for you, you must listen, the appointment cannot be fulfilled. Other things must be done tonight. If our torment is to end, if liberty is to be restored we must grasp the nettle even though it makes our hands bleed. Only through pain can tomorrow be assured.” That bit “Nowhere is there more beauty than here,” that voice sounds like it could be describing the village. And that could mean the radio transmission might be coming from somewhere in the village itself. And what about that voice, to my ear it sounds very much like No.2 of ‘Free For All,’ actor Eric Portman! And that radio message, was that meant for No.34 whose body was found at the shore line by No.6, because if it was that part “the appointment cannot be fulfilled. Other things must be done tonight” sounds like help isn’t coming, and that he’s been hung out to dry!
And that blue post box in ‘Hammer Into Anvil,’ is that the new “Blue zone” in the post as mentioned as one of No.2’s achievements in ‘It’s Your Funeral!’
In ‘The Schizoid Man’ when No.6 sets that taxi in motion, and Rover chases after it, that’s probably an analogy like throwing a stick for a dog!
And in ‘Checkmate’ when No.14 asks No.6 if he plays chess he does so with good reason, because everyone on that chessboard has to know how to play chess, so as to be able to make the right move when it’s called out by one of the players. The Prisoner can be so simple!