Watching The Prisoner - Fall Out 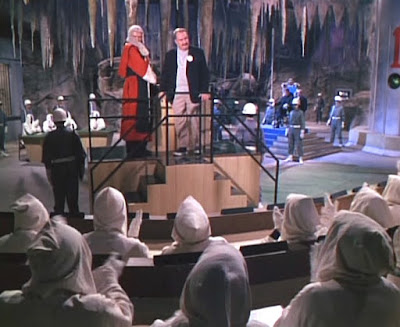 And here we are, No.2 is dead, a fact which No.6 doesn’t appear to have been happy about. He wants to see No.1 and the supervisor takes him and the butler, who holds the key to the door. On the way No.6 is given his own suit of clothes, because it was felt he would be happier as himself!
‘Fall Out,’ the conclusion to the Prisoner’s ordeal, should be watched on the 9th of December after the conclusion of the week’s events which took place in the Embryo Room. Once No.6 and his three confederates crashed out through the gates at the end of the tunnel it took about three or four days to reach . Taking into account the speed of the Highwayman lorry, and the route they had taken. Also whether they drove all through the nights as well as the days, and there could be delays at borders and customs. However despite the guesswork, one thing is certain, No.6 and his three remaining companions must arrive back in on or around . And the evidence for this, well haven’t you read my book ‘The Prisoner Dusted Down?’ Certainly the evidence is to be seen for itself in the episode.       To my mind it appears ‘Fall Out’ is the final throw of the dice, the last desperate manipulation of No.6. Heap praise on the man, congratulate him on his private war, and for vindicating the right of the individual to be individual. Offer him ultimate power, and then face him with himself! Show him that he himself has been responsible for the village and his current predicament all the time. And yet there is an argument that No.1 is in fact Curtis who had been kept on ice, perhaps in the hospital, in readiness for such a situation as this. Yes No.6 said Curtis was dead, but did he check the body, or did he naturally assume Rover had killed Curtis? And even if Curtis had died, we have seen how they are able to resuscitate a person, as they did with a “late” No.2! There is another argument that the High Court Judge was overseeing a coup, in attempting to replace No.1 with his identical look-a-like.
Back in 1968 when ‘Fall Out’ was first screened it was said to answer all the questions, it didn’t, it only managed to muddy the waters even more! Especially because there it was gone, and with no chance of watching ‘Fall Out’ again, which can be so easily done these days.
Who was running the village when No.2 was acting the role of a High Court Judge? Not the Supervisor, he was sat amongst the other delegates of the Assembly! Did they bring in an Interim No.2? No there couldn’t have been enough time. So someone would have had to have been promoted from Administration. Perhaps they brought back the interim No.2 who we saw in ‘It’s Your Funeral’ and as an Observer in ‘Once Upon A time.’
The Irony, All you is love in the middle of a fire fight!
Questions are a burden to others, but nevertheless, did the village actually exist in any materialistic form, or was it symbolic of the village {or prison} we all carry within our minds?
The Fact that the Prisoner had been in the village all the time, indicated by the automatic opening of the front door to his house!
Numbers, representing man’s lack of freedom, the stifling of the individual’s liberty by authority.
The former No.6, who survived the ultimate test and thereby won the right not to be known as No.6 or any number at all. Does that mean he no longer exists officially?
It was promised, that ‘Fall out’ would reveal all, and answer all those questions television viewers had. Whether it did or not depends on one’s perspective I suppose. However over the years I have grown to feel that ‘Fall Out’ is the logical ending to the Prisoner.

A question, what did No.48 do in order to be able to wear his own clothes for his trial?
Another question, with No.48 being the odd one out, in his representing uncoordinated youth as the Judge put it, was it No.48 who was put on trial, or youth in general?
“Evacuate…evacuate…evacuate!” such was the order given to the citizens of the village at the command of Number 2-the Judge. But did the citizens know what to do, or where to go in such an emergency? Where were the assembly points for the helicopters? The command came through the public address system for them to evacuate, but not where to go, or where to assemble for evacuation by helicopter. It could be that the citizens had been drilled for such an emergency, that fire drills had been carried out from time to time. Well it stands to reason that the village would have had a fire station, standing by in case of an outbreak of fire. Perhaps a Mini-Moke could have been converted into a small fire engine!
Then again, we do not actually see the citizens being well drilled for such emergencies as for fire, or an evacuation. People calmly lining up ready to board the helicopters. They seem to be more in a panic. Running this way and that, eventually a large group running away from the village along the beach! But at least the village administration had the sense to have all those helicopters available for just such an emergency!
What were the chances? A haulage lorry carrying the same surname as mine, Stimpson, being driven along the M1 at the same time they were filming for ‘the Prisoner?’ My surname in ‘the Prisoner’ I was really chuffed to bits when I first saw that! 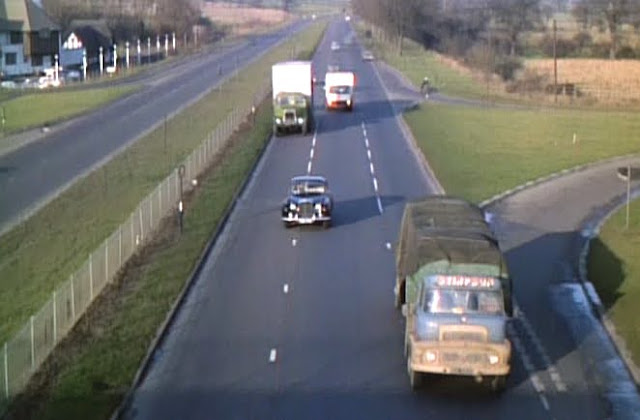 When Morag and I began this experiment of watching ‘the Prisoner’ as in real time this way, the day of the finale or conclusion to the series if you prefer, seemed to be ages away, and yet here we are. But during that time, between the 17 episodes we see, have been the days and weeks which take place between each episode which we are not privy to. I find it difficult to imagine that No.6 was troubled by every interim No.2 who came along during those unseen days and weeks. There must have been times when No.6 wasn’t bothered at all, but left to his own devices. Meanwhile the day to day life in the village went on, perhaps the construction of the new concert hall for example. There would be new arrivals, agents coming and going, the faces the same but with changes of mind as the Seltzman machine continued to be put into operation. And no doubt experiments continued to be carried out on the citizens. And think about those interim No.2’s coming and going during all that time, and so many of them! All that seems to remain is to cue the clouds, cue the thunder, cue the Lotus 7, and the music……… unless I choose to end the Prisoner with him driving passed the Houses of Parliament, No.48 trying to thumb a lift on the dual carriage way, and the late No.2 on his way into the House of Lords, ignoring the last 10 seconds of ‘Fall Out’ and imagine the former No.6 parking his Lotus in that underground car park, then in an office somewhere in Whitehall, having it out about his abduction, and the village, with the Colonel for the last time!