Watching The Prisoner - Once Upon A Time 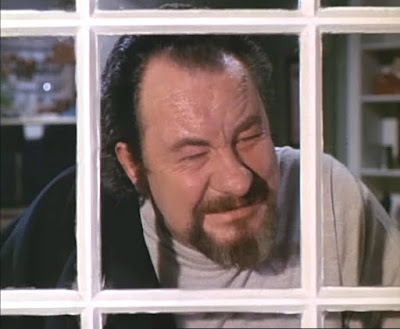 As I approach the end of watching the Prisoner in this format of real time, and think back to when it began back in October last year, it seemed ages then until it was time for ‘Once Upon A Time.’ And yet here we are just 8 days until No.6 faces his nemesis, the agent responsible for his downfall!
The above picture, is this how No.2 first woke up in the village having been abducted there as a prisoner? He’s certainly not happy at having been brought back to the village, and the last time No.1 didn’t listen to him when he told him he was using the wrong approach. But perhaps he was unhappy at being usurped by a weather balloon! It has to be either one of them. No.2 was a good man, is a good man, but if they get No.6 he will be better, and No.2 is prepared to put his life on the line for the cause. Although there are better causes to die for! 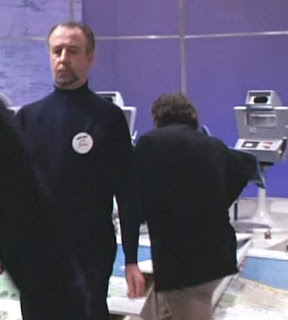 This is the chap, one of the 5 Observers who in ‘Once Upon A Time’ are released by the Supervisor as subsidiary personnel. Do you recognize him? He is a former interim No.2 from ‘It’s Your Funeral,’ so now we know what happened to him after that. Unless of course he wasn’t an interim No.2 at all, but was an Observer who was asked to perform the role of an interim No.2 for the camera!
‘Once Upon A Time’ but this is no fairytale as No.6 is about to have his mind regressed to his childhood, as in the Embryo Room he’s about to relive his life from the cradle…..to the grave. All the world's a stage, and all the men and women merely players. They have their exits and their entrances, and one man in his time plays many parts, and the butler is there to assist in the deliberations, as well as to make the tea! It is generally thought that when it comes to murder mysteries it’s the butler who always does it, that is a fallacy. And certainly in this case the butler is blameless, as it appears No.2 died of a heart attack, brought on by the strain of the ordeal. But he did bring it on himself, but at least he managed to learn more about the reason behind No.6’s resignation than any former No.2.
‘Once Upon A Time’ or to give this episode its original title “Degree Absolute’ is the ultimate test and the prequel to ‘Fall Out.’ Eight days, one day and night to prepare and regress No.6’s mind back to his childhood, back to the age of 5 years 5 5 5 5 5 5 5 5. Forcing No.2 to sit up all night in 6 Private reciting nursery rhymes to No.6, so its no wonder he got off to such a bad start having had no sleep the night before!   ‘Once Upon A time’ is a serious matter, a last ditch attempt to extract the reason behind the Prisoner’s resignation, but what No.6 has to say about why he resigned “I reassigned for peace of mind. Because too many people know too much” really warrant such a desperate measure as Degree Absolute?
One might wonder where they get people to promote as No.2, perhaps from the depths of the Civil Service, or promoted from within the village administration. But caught on camera as the control room is cleared of all subsidiary personnel, one former interim No.2 seen in ‘It’s Your Funeral’ is now an Observer!
At the end No.6 didn’t seem at all happy when the Supervisor said they’ll need the body for evidence, he smashed his glass on the floor in a fit of anger! The Supervisor then asked 6 what he desired, he said “Number 1.” Why to make his report? After all Nadia had to make her report to someone after the end of her secondment to the village. No.6 in his impersonation of Curtis thought he had to report to the General. And the Colonel at the end of ‘Do Not Forsake Me Oh My Darling’ was keen for No.1 to know that he had done his duty.
‘Once Upon A Time,’ one day and one teeny-weeny week before the Fall Out, and we see but a fraction of what takes place in the Embryo Room. And before you ask, no I’m not going to try and eke out this episode and take a week to watch it, that would be trying to take things just a bit too far.
It was simple to date this episode, it had to take place 8 days prior to ‘Fall Out,’ and ‘Fall Out’ has to be placed at the finale of ‘the Prisoner’ in December due to the date No.6 and his two confederates returned to London.