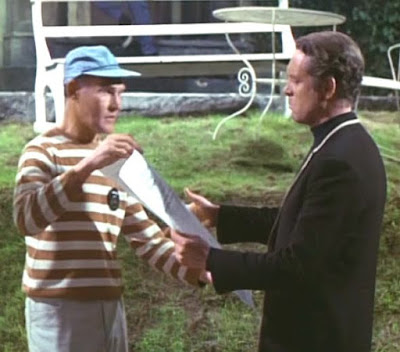 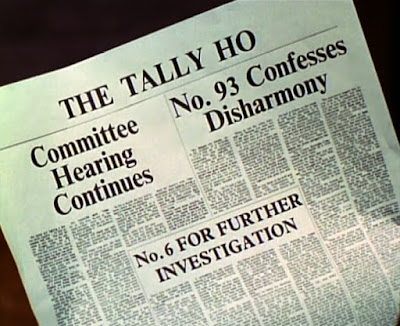 The Tally Ho, according to No.6 in ‘Many Happy Returns,’ is issued daily at , and yet by the time of ‘A Change of Mind’ two editions are issued during the same day! The above is the first edition No.6 is issued with while on his way home from the Town Hall.
After the second occasion when No.6 leaves the Town Hall, having been declared as being unmutual by the Committee, he takes a copy of the second edition from the Tally Ho dispenser himself. He pauses outside his home taking time to read at least the headline “No.6    Declared   Unmutual.” 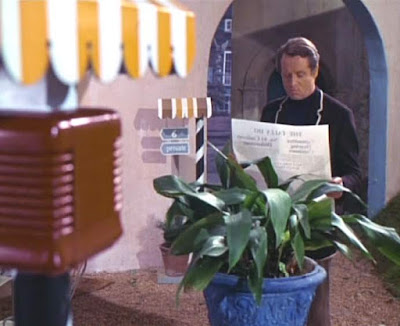 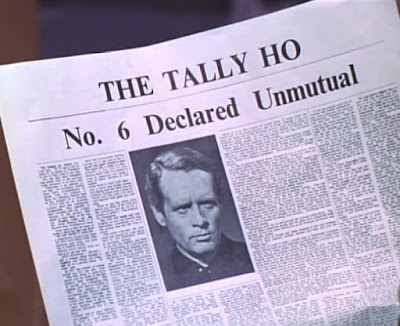 Just a minute, there’s something wrong here! Never mind the fact that The Tally Ho has been published prior to No.6 being posted unmutual, we have seen that sort of thing before, but look at the supposed second edition through the back of the paper. 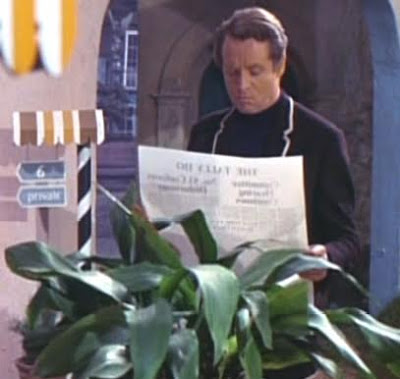 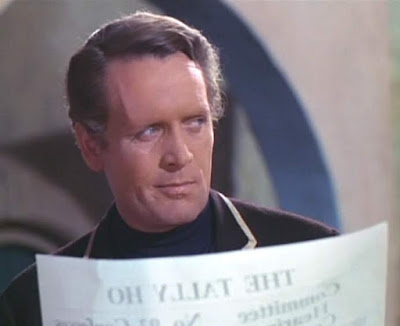 In long-shot it is plain that both the first and second editions of The Tally Ho are one and the same, with “No.6   Declared   Unmutual” inserted as a one-off close-up shot. I did think that the second scene with No.6 and his copy of The Tally Ho was made up of out-takes from the first scene. Only in the first scene the Tally Ho ends up crumpled up and thrown into the grate in the fireplace. In the second scene the broadsheet is again crumpled up, but thrown away outside his cottage.
Interestingly only the top half of this edition of The Tally Ho was produced by the production team, as the bottom half of the broadsheet is blank, half hidden by the Tally Ho dispenser, and the leaves of the large plant in the foreground. 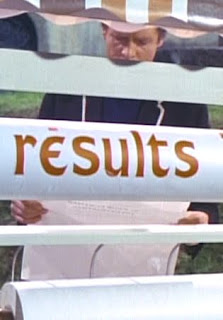 This is the first time I have observed this about The Tally Ho, and I no doubt the bottom half of The Tally Ho with the headline “No.6   Declared   Unmutual” is also blank. It just goes to show that visually there is still much to be discovered in ‘the Prisoner.’