by our own reporter 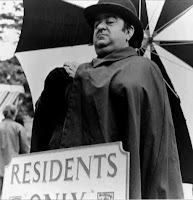 So the butler says he didn’t do it. And yet since the writing of murder mysteries there has been the expression “The butler did it,” which is used to describe an ending or resolution to a fictional mystery that is stereotypical, predictable, or contrived. It is based on the murder mystery cliché of revealing that the butler was the one who committed the murder. The concept of "the butler did it" is commonly attributed to Mary Roberts Rinehart. Her otherwise forgettable 1930 novel, “The Door,” is notable for the ending, in which the butler actually is the villain. However the actual phrase “the butler did it,” never appears in the text.
We know absolutely nothing about the butler which makes him the most enigmatic character in ‘the Prisoner. He serves each new No.2 with an unquestioning loyalty, and carries out his duties impeccably, he can also pilot a helicopter. He is thought to be mute because he is never heard to utter one single word in the entire series, but perhaps he has nothing to say for himself, or has nothing interesting to say. And yet he must speak on at least two occasions, the first in ‘A B and C’ when No.2 is speaking on the telephone “Is he. Send him in.” it’s the butler who shows No.6 into the office so it must follow that it must have been the butler speaking to No.2 on the telephone informing him of No.6's visit. And again in ‘Its Your Funeral’ when No.6 goes calling on No.2 he said “I thought I told you that I didn't want to be disturbed. Tell him to go away.” Who else is there to tell No.6 to go away but the butler!
The butler has something in common with No.6, he doesn’t wear a numbered badge, and wears his own clothes, well at least he is not forced to wear the usual colourful attire, although he does wear a cape…inside out, perhaps because he doesn’t want to look ridiculous! Symbolically the butler is seen to be the “silent majority” those citizens who do not have a voice. And yet he is always at the heart of things, such as the award ceremony at the Arts and Crafts Exhibition, and can be described as being “the Keeper of the Great Seal of Office,” seeing as it’s the butler  who presents the Great Seal of Office on a crimson cushion during the Appreciation Day ceremony. He also enjoys a game of chess, as in ‘Checkmate’ he follows the game which uses human chess pieces, from the top of the bandstand reproducing the moves on his own chessboard. Some people have come up with the idea that it’s the butler who is manipulating the moves on the human chessboard as he makes the moves first on his own board! And ‘A Change of Mind’ no doubt it was the butler who set out the tables in the committee chamber, and when the Chairman of the committee said “Gentlemen its time, I think we’re more than ready for a tea break,” in all probability it’s the butler who has made the tea! During the week in the Embryo Room the butler is there alongside his master, cooking meals, keeping the cage neat and tidy, as well as serving his master, as No.2 and No.6 carry out their deliberations. And then there’s ‘Fall Out.’ The butler seems to know a great deal about what’s going on, he sees the former No.6 as being his new master, so he’s quick to see its time to change sides judging by the way he takes part in the violent and bloody revolution. Not only does he kill with a Thompson machine gun, but at one point in the rocket, he can be seen strangling someone with his gloved hands! And the question has to be asked, how did the butler know about that Scammell Highwayman transporter? At the very least the foot pedals of accelerator, brake, and clutch would have had to have been adapted in some way in order to suit the 's size, ordinarily his feet would not have reached the pedals. Or if they did he wouldn’t have been able to see over the steering wheel, meaning no disrespect to our diminutive friend. And then back in the butler accompanies his new master to his home in , and as he stands on the steps of the front door opens automatically and the butler goes inside the house. It is because of this that people have arrived at the conclusion that the butler did it, and had been No.1 all the time.