Watching The Prisoner – Many Happy Returns

And so continuing the screening of ‘the Prisoner,’ when No.6 wakes up to find both the electric and water has been disconnected. What’s more when he takes a step outside he finds there is no-one about, and as he explores the village he finds the place completely deserted! One might ask why they bothered the cut off the water and electricity first, but I suspect that was to make the Prisoner feel as uncomfortable as they could. No water to drink, and impossible to cook a hot meal.
I imagine it took No.6 a couple of days to fell the required trees in order to cut the logs to required length. Empty the steel drums, and find enough rope he needed, to construct his sea-going raft which he would have had to begin on February 20th in order for him to set sail no later or sooner than the 22nd for him to spend 25 days at sea and return to London on the 18th of March. Of course the problem is that this episode overlaps with ‘The Schizoid Man.’ While No.6 sets sail aboard his raft he’s still growing his full beard and undergoing conditioning in 12 private! And there lies the problem, sticking to dates such as Feb 10th and March 18th and 19th when constructing a screening order such as mine. In some regards to ‘the Prisoner’ I have learned to ignore certain things in order to make the other pieces of the jigsaw fit! 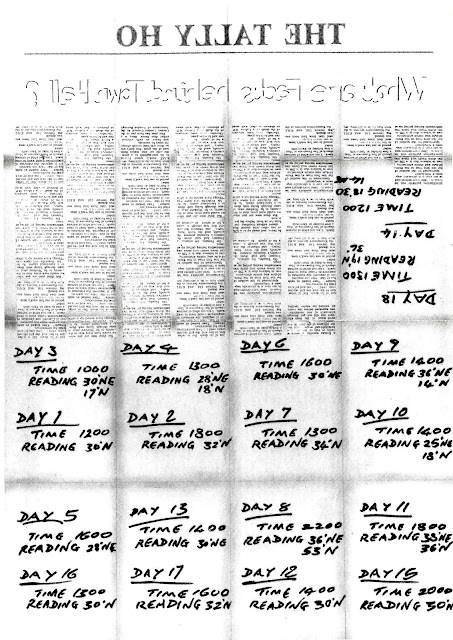 {No.6’s Navigational Log written on the back of The Tally Ho}

Our friend No.6 is a resilient fellow; he spent 25 days at sea, sleeping only 4 hours out of each 24 hours eating cold corned beef, baked beans and tinned fruit, and cold water to drink. I wonder why he didn’t bother to tether himself to the raft using a life-line? After all he is in the , and particularly when he has the to cross, a huge wave might so easily have washed him and his raft away! In the beginning he tries to maintain a certain state of hygiene, but that all soon goes by the board, and the lack of sleep must have been taking its toll.
So when No.6 was asleep, if only for 4 hours, who was steering the raft? He had no automatic steering gear, so surely the first time No.6 slept for 4 hours he would have been carried miles off course by the tides and currents! When you think about it he was lucky to reach , let alone at all. He could easily have died on the raft from hypothermia! You can read further details of this in my book ‘The Prisoner Dusted Down.’
Mrs. Butterworth gives the impression that she, like No.6, are recent arrivals in the village, because she is still wearing the same dress she did the last time we saw her back in . But there is no indication of the duration of time between the moment No.6 drove off in his Lotus 7, and the moment Mrs. Butterworth walked in through the door as the new No.2. It is clearly impossible to say with any certainty when Mrs. Butterworth arrived in the village. But I should imagine it was a good deal sooner than No.6. Well she would have to have taken up office, and given time to settle in, not to mention the baking of the cake!
During this episode No.6 was treated to the first genuine act of kindness since his abduction to the village, by a young Romany woman, who gave him a hot cup of tea, soup, or broth. Her act of kindness was probably brought about by meeting someone worse off than she, this raggedy man. Then later this raggedy man shows up on the doorstep of what had once been his home.
Eventually he makes his way back to his house in . He walks up and down the street, probably checking his surroundings. Eventually he climbs the steps of his house and knocks on the door. Who does he think is there to open the door for him? He certainly hasn’t got the key to his house, so if the housemaid had not opened the front door perhaps No. 6 would have had to break in!


Mrs. Butterworth takes him into his home, although Martha the housemaid looks down her nose at him. Mrs. Butterworth feeds and waters the man, but as he’s about to leave the house, having two calls to make, she shouts at him, with some feeling I might add, that he mustn’t go like that. She then invites him to wash and shave, and borrow some of her late husband’s clothes. And if it wasn’t bad enough being entertained in what was your own home, the merry widow allows him to borrow his own car to aid him in being able to get about! 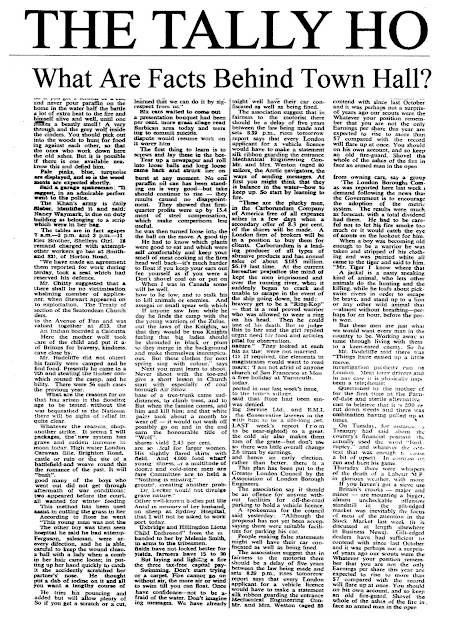 No.6 has to make two calls, one in town and one in the country. It must have felt good for Number 6 to be behind the wheel of his car again, the freedom of the open road and all that. He parks his car in that familiar underground car park we see during the opening sequence. He leaves the car park and makes his way to an office somewhere along , and in the office where he handed in his letter of resignation, he approaches the man sat behind a large oak desk.
“Anyone at home?”
Apparently it being Saturday the Colonel would probably be at his country residence, or the golf club, hence the call to be made in the country. 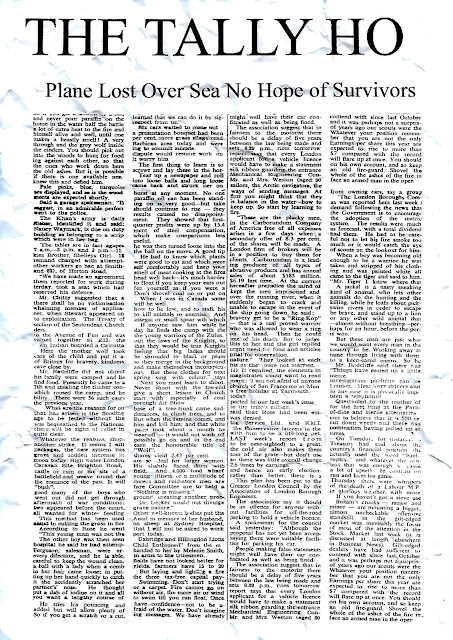 The original script called for Mrs. Butterworth to hand No.6 a present wrapped up in a copy of The Tally Ho, the present being the roll of film containing all the photographic evidence of the village he had taken on the day he escaped from the village! According to the Tally Ho headline it looks like there has been an accident somewhere at sea, ‘. No Hope of Survivors,’ runs the headline. So to the rest of the world No.6 will be dead, which is what No.2 wanted in ‘Dance of The Dead.’ Perhaps that “amended body” was lost somewhere at sea and never found.


However as it is, No.6 has been unceremoniously returned to the village, just as though he had never been away, the amenities are restored to his cottage, the coffee is brewing, and Mrs. Butterworth {Number 2} keeps her promise having baked the cake she said she would if he didn’t forget to come back, and he did came back. But then there wasn’t any other place for him to go! It’s as Number 2 says in ‘Dance of the Dead,’ “He’ll, eventually go back to his room, it’s the only place he can ever go,” and that’s as true in as it is in the village. Mind you Number 6 is far better off in the village, at least he has a home, and he’ll be looked after for as long as he lives. Mind you it might be a little embarrassing for him, when he’s forced to pay that I.O.U for 964 work units he wrote on the counter in the General Stores! 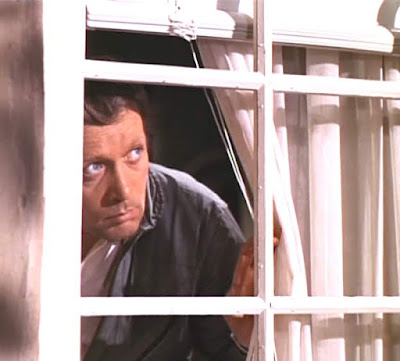 No.6 goes to the window and looks out and upwards, but it’s no good him looking up at the sky, the Gloster Meteor is long gone by now. On its way to be ditched somewhere at sea by the pilot who would presumably be picked up by the crew of M. S. Polotska.