60 Second Interview With No.22 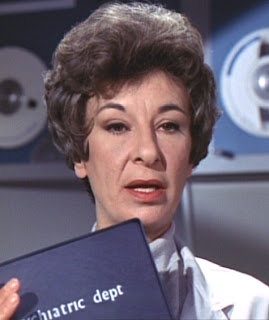 It was a feeling of deja vu and trepidation, that I and my photographic colleague went along to our next assignment, an interview at the hospital with No.22.
No.113 'I have the strange feeling that we've met before.'
No.22 'I don't think so, I would have remembered. Have you been in for treatment before?'
'We are not in for treatment doctor.'
{No.113b begins to twitch}
'What about him?'
'Oh don't worry about him.'
No.113 'Smile.' {click goes the camera}
'I met your male counterpart yesterday.'
'Really!'
'Your predecessor No.40, in a way he was just like you. You're not related are you?'
'Don't be ridiculous!'
'He, like you, saw that everyman has his breaking point. What's more he enjoyed human experimentation. But nothing in your league.'
'If you are not here for treatment, why are you here?'
'You also share the same unfeeling attitude to your patients. Look what you did to No.8.'
'That was a mild experiment. She was merely hypnotised, and used a reaction transmitter, which was in the locket about her neck. Nothing more.'
'It was an experiment first used on Dolphins!'
'One cannot further human aspirations without experimentation.'
'You wanted to carry out a Luekotomy on No.6.'
'It is the only way to treat people like No.6.'
'You would have enjoyed, even savoured finding out No.6's breaking point, much the same as your predecessor.'
'And what about you, what's your breaking point?'
'Oh no doctor, I'm not one of your patients.'
'That's easily remedied. Besides, not everyone here has the protection of No.2.'
{And so it was with that threat in mind, that I and my photographic colleague No.113b took our departure of the hospital, promising never to darken its door again}