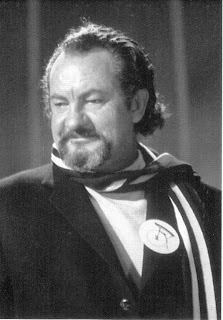 No.2, is a very charming man, and like a predecessor he thought that if No.6 would tell them one simple thing, the rest would follow, 'Why did he resign?'
But No.2, like his predecessor was wrong! However he did try to encourage No.6 to settle down, perhaps to do some woodwork for him. No.2 is also a very clever man, as he knows exactly what No.6 is up to, and is pleased to allow him to get on with building his boat, in the safe confidence that he has an agent close to No.6.
Yet in another situation, this No.2 begins to like No.6. Apparently No.2 died, the drink being poisoned, and would have remained dead, had it not have been for the events of Fall Out.
In his time this No.2 has weilded a not inconsiderable power, has had the ears of Kings and Princes of many lands, revolutions have been nipped in the bud at a propitious time, with a word in the right ear from him.
Such a pity then that he did not resist them for longer, but everyman has his breaking point! Yes, this No.2 was once brought to the Village as a Prisoner. But in the end he spits in No.1's electronic eye, and fights in the violent and bloody revolution of Fall Out, then upon his return to London, to the Houses of Parliament relatively unscathed.    BCNU.
Posted by David Stimpson at 07:55