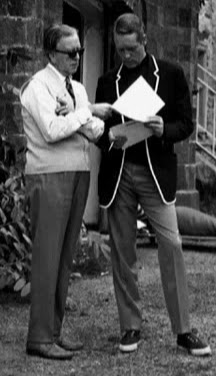 'Hello Pat.'
'What have you here?'
'I understand you're stuck for an ending for the series.'
'Who told you that?'
'Oh the director and some of the crew were discussing it.'
'Were they?'
'Yes they were.'
'And this is?'
'My idea for the conclusion to the series.'
'It won't work.'
'Oh go on Pat, give it a chance!'
'It says here on page two, that the Prisoner escapes the Village after discovering a time displacement device.'
'Good isn't it?'
'But that soemething goes wrong with the co-ordinates, and the Prisoner ends up where it all began.........dark clouds gather over a long and deserted road. there's a clash of thunder......this is the start of Arrival!'
'Which is the whole point of the thing Pat, the whole things a vicious circle.'
'I don't like it...and don't call me Pat!'
'Well what about the idea of Lew Grade as No.1?'
'Don't make me laugh!'
BCNU
Posted by David Stimpson at 09:02