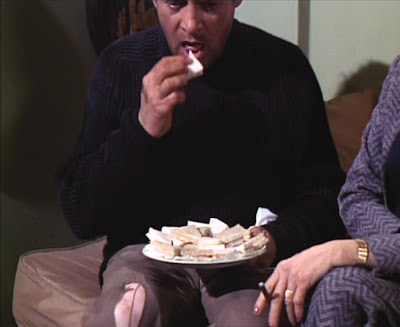 It has been asked, in the past, by a number of fans of the Prisoner, how is it possible for one man to eat a whole plate full of sandwiches? Well I ask you, look at those dainty sandwiches, made by Martha's own fair hands. Hardly any filling, and all the crusts have been cut off, making each sandwhich little more than 'bite-size! Oh yes, No.6 also had some fruitcake, which No.6 said was the best he had ever tasted. We don't know how much of that fruitcake was actually on the cake stand, as the viewer only sees the crumbs!
Mrs. Butterworth is a widow, Arthur was her husband's name, and he was in the Navy.....Arthur, now where have I heard that name before in the Prisoner series? Oh yes, Dutton mentioned Arthur's name at the same time as the Colonel in Dance of the Dead. Now wouldn't it be delightful if Mrs. Butterworth's Arthur, turned out to be Arthur, as in Arthur and the Colonel mentioned by Dutton in the next episode in the series Dance of the Dead. Well Arthur was in the Navy, and British Intelligence does recruit from the Armed Forces. Ah, I see you have observed the flaw in that scenario, Arthur had already died by the time of Dance of the Dead. But not if Dance of the Dead came before Many Happy Returns in the screening order of the series. After all, according to series Librarian Tony Sloman, Dance of the Dead was placed second in the Library order of the series. That might then make Mrs. Butterworth's husband, Arther, the Arthur mentioned by Dutton. Grasping at straws? Yes quite probably, but it's a curious curiosity nonetheless for that.  Be seeing you.
Posted by David Stimpson at 09:08