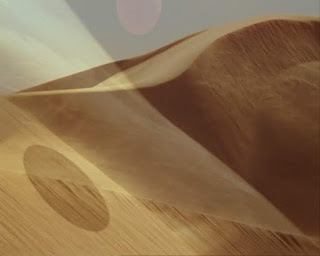 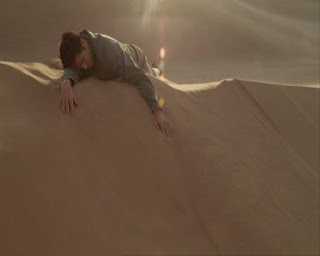 I like the way in which ‘Harmony’ begins where ‘Arrival’ left off.
Having been attacked by the Guardian {I do not write Village Guardian, as the Guardian never appears in the village in this series} at the end of ‘Arrival,’ Six is left unconscious in the desert! Then there is another remembrance, Michael returning to his  apartment with Lucy. While as a boy he is on the beach looking for  his brother, as 16 is in the desert looking for his brother Six!
Six didn’t recognise 16 as his brother, because his bother was lost at sea on one of their trips to the beach when they were boys. 16 is not Six’s brother. Two gives Six his brother back, and a family. Family is important to Two, its just a pity that Two’s own family is so disjointed!
Two recommends Six undergo some therapy, The Talking Cure. Unless Six is afraid that Two will mess with his mind, or that Six will discover that he is the problem after all!
In Palais 2, Two’s residence,11-12 sits on his mother’s bed as she sleeps on, dreaming The Village, and then spies on Two as he feeds his wife, M2, three more pills. And Six helps 16 with a bicycle repair, before he goes to the Clinic for his first therapy session with the brothers 70. For Six The Village is a dark place, his home is not his home, his brother is not his brother, nothing’s real in the village!
Nice to be seeing a pair of twins in the village, 70, who tried talking things out with Six. Two doesn't believe in this “talking therapy,” but then it's not important for Two to believe, just as long as Six believes!
Is it really necessary for M2 {2’s wife} to be kept sedated in the village, when its Helen back in who is dreaming the village?
I think it was very clever of Two to give Six a family, through which Two hoped to see Six accept his situation through his brother, and finally settle down. It appears that Six used to work at the bus depot, as a bus driver!
Harmony I found to be a surreal episode, with a surreal ships anchor in the desert, along with a long abandoned railway halt! It's all to do with the mind isn't it, and that takes some getting my mind round. 16 was never Six's brother, and people go on the bus tours of The Village day after day, seeing the same old thing, described in the same old way. And what about that Solar Cafe, rebuilt, as though the explosion in Arrival never took place. What's more there's something very 1950's about The Village. What with the Bubble car, and the black  van. They come for you see, and in broad daylight, just like they came for Six, those men in their white suits and black  van. They come for you, and take you to the clinic. I wonder what they'll do to Six?
So surreal, with so much happening, I'll really have to watch this episode a second time before I can really get into it. Because I was determined not to give up on the series. And that was a brilliant Village guardian effect, the way it moved though the water, which really wasn't water, but sand.....poor 16!


Breathe in…breathe out…more Village
Be seeing you
Posted by David Stimpson at 07:28