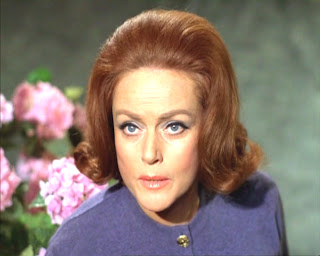 Nadia Rakovsky-No.8, who was apparently sent to the village to recouperate in the Chimes of Big Ben, that according to No.2. But Nadia tells No.6 that all she did was to resign, so is that why she was brought to the village? No.2 said that she wasn't really that important, that he was surprised that they had even sent her there! Yet at the same time, Nadia says that she didn't think that "It would be like this," suggesting that she was actually sent to the village, which of course she was, as a plant.
Nadia tells No.6 that she saw a file about the village, but only for a few seconds, and that she knows where the village is. That she knows some people who resist them in a small fishing village long the coast. That she has a contact outside the village.
Yet as the story pans out, we learn that we cannot believe one single word Nadia says. We cannot be sure that she is Estonian, or whether or not her name is really Nadia Rakovsky. Or that at the age of seventeen she was an Olympic bronze medalist. But somehow I cannot help but like Nadia, who is very good at her job, whichever side she might be working for.
Be seeing you
Posted by David Stimpson at 14:16