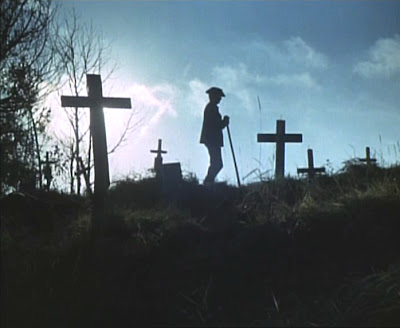 There has been some comparing of the two series of the Prisoner, this cannot be helped, and was sure to have happened, and no doubt there will be more comparisons made. Look at the above picture. That's the Sheriff in Boot Hill, after just burying the body of Cathy, who was strangled to death by the Kid in the episode Living In Harmony. But of course there's no actual body in the coffin the Sheriff buried, because all the action seen in Living In Harmony was taking place inside No.6's head, and what the viewer sees is nothing more than 'role playing.'
Well see the next picture, there's the Prisoner somewhere out there in the desert and mountians. There's a dead tree, and there the Prisoner has buried what he thinks is an old man who has just died of heart failure. 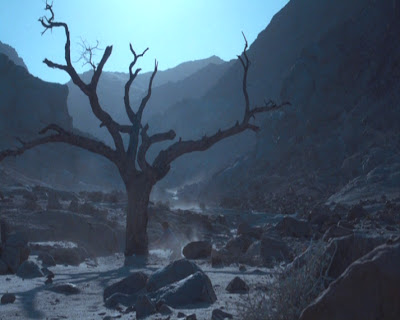 That old man was 93, who having died, has gone back to that 'other place,' back to his previous life. So it is possible that there's no body in the grave the Prisoner dug. To give colour to this, one sees Six open the grave of 4-15 in the final episode Checkmate, 4-15 whom he was to have married in the episode Darling. But having opened that grave Six finds that 4-15's body is not there - the coffin is filled with oranges! You will recall how Cobb supposedly jumped out of the hospital window in Arrival, and how a funeral was held for him. Well there was no body in Cobb's coffin, just as there was no body in 93's coffin, you need a body! So it just goes to show that death is an escape in both series, only reinterpreted in the 2009 production.
I'll be seeing you
Posted by David Stimpson at 09:52