Patrick McGoohan and film Director Don Chaffey working out the moves of the human chess match for the Prisoner episode Checkmate. 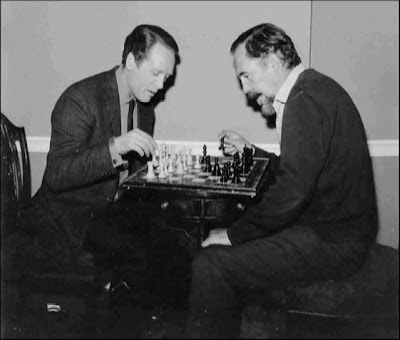 Pity they didn't work their moves out a little better. Because somehow the moves don't work in the actual scene. More than that, if you watch the scene carefully as the chessmatch is being played out, you can see that one minute there are few pieces on the board {many pieces having been wiped off the board} and the next the chess board is as though the game was just going through the opening moves!!
The human chessmatch scene was the most difficult to film, and it appears the most difficult to edit together!
Be seeing you
Posted by David Stimpson at 13:26