I received an email yesterday in regard to a new biography for the late Patrick McGoohan by Robert Booth which is released on March 30th 2011, and for which Amazon Books are taking advanced orders now. The price is £9.99. 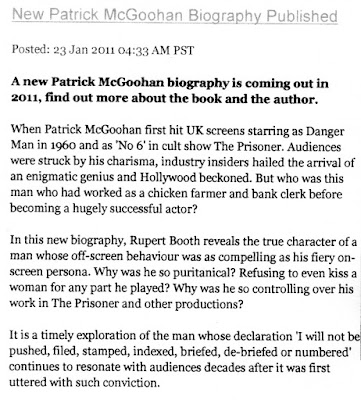 It will be interesting to read this biography, and I don't usually read biographies, nor am I a fan of Patrick McGoohan himself. Because the last so termed "biography" about Patrick McGoohan by one Roger Langley, was actually read as an extended filmography. And as a matter of interest, back in the early 1990's I became aware that a gentleman had written a biography about the life of Patrick McGoohan. Indeed the gentleman in question sent McGoohan a copy of the biography. McGoohan then had the said manuscript supressed, even though he had co-operated in the writing of it! It's a pity that that manuscript has not been published since McGoohans death. I'm sure it would make for interesting reading. Becuase it makes me wonder what was in that biography that McGoohan didn't want made known!
Be seeing you
Posted by David Stimpson at 09:29