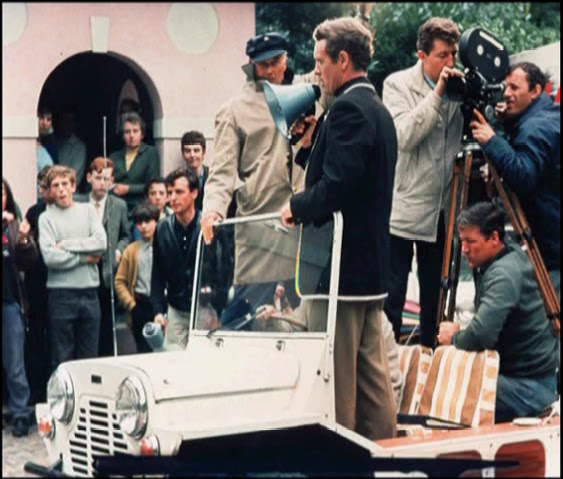 This photograph was taken at Portmeirion in September 1966 when the Prisoner was being filmed in the Italianate village. Here No.6 is giving his final speech from a village taxi during the filming for the episode Free For All. Now I know of several people who claim to have been at Portmeirion and therefore witnessed some of the filming. Now I'm not saying they are lying, because there were peole actually staying at Portmeirion, and day visitors to Portmeirion were still being allowed into the village while filming was taking place. But I mean anyone could claim to have been at Portmeirion at this time....I was there myself. The ginger haired youth in the crowd of on-lookers to the left of the photograph.. Here is an enlarged section of the photograph to help. 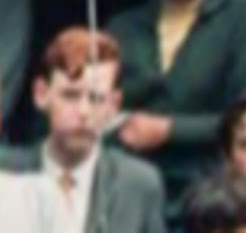 Well I suppose I'll have to come clean..........because that's not me in the photograph. there's no way it could be me, although I did look like that youth in my own youth. But at the time when the Prisoner was being filmed in Portmeirion, I was but eleven years of age, and had never heard of Portmeirion.
However in this next photograph which comes from the opening sequence of the Prisoner, you can see behind Patrick McGoohan in his Lotus Seven, as he turns into Abingdon Street, there is a Green Morris Minor a few feet behind. 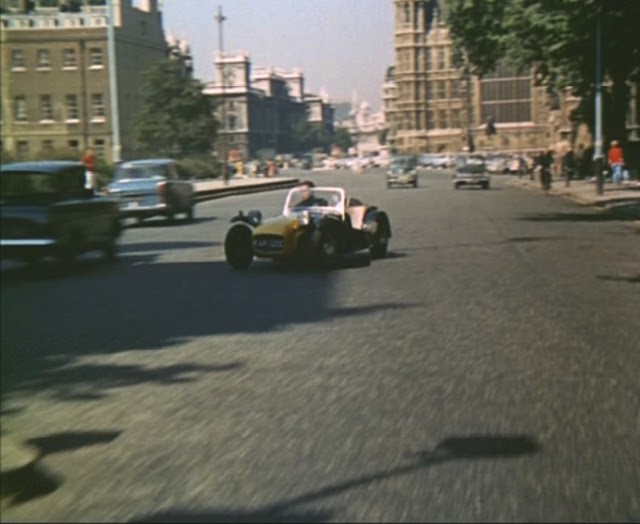 Now at the time of the filming of the London section of the opening sequence to the Prisoner, my wife, who wasn't my wife at the time, owned and was at the time, driving a green Morris Minor in Westminster and drove passed the Houses of Parliarment. Here is an enlarged section of the above photograph. 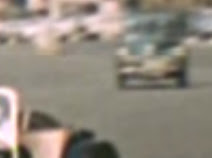 Okay, the enlargement is a bit blurred. But who is to say, that my wife was not behind the wheel of that green Morris Minor at the time. And thereby appeared in the Prisoner driving that car? Because a good deal of people, passers by on foot, and many people driving cars, busses, lorries, and taxis all appeared in the Prisoner, if ever so briefly.
BCNU
Posted by David Stimpson at 14:42