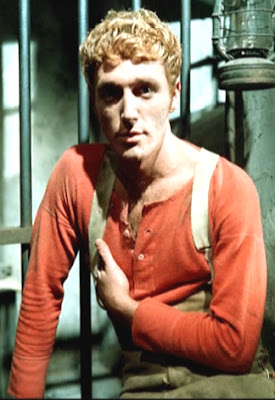 The Kid is the fastest on the draw that the Judge has seen, up until the time when the man with no name was brought to town. The Town of Harmony.
The Kid is a trigger happy, homicidal manic. The story goes that the clothes he wore, were taken from the victims he killed. But what turned the Kid into such a killer? Perhaps as a boy he underwent some traumatic event that tilted his brain. Perhaps his mother and father were attacked and killed by Indians. His mother raped and killed, and his father pegged out on the ground, covered in molasses, and left to be eaten by ants. But of course that's mere speculation, save for the Kid wearing the clothes of his victims. That was supposed by Director David Tomblin, scriptwriter Ian Rakoff, and Frank Maher who produced the story for the Prisoner episode Living In Harmony.
BCNU
Posted by David Stimpson at 09:14